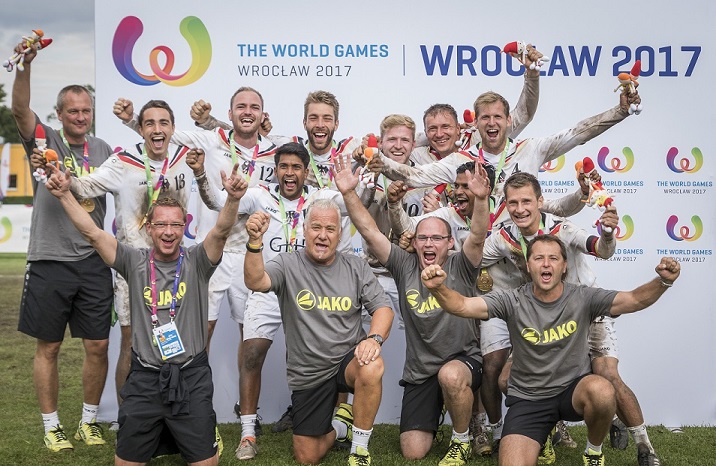 In a rematch of the final 2013 in Colombia, the German team delivered a strong team performance and won after the last World and European Championships also the World Games title – despite bad luck in the first match, where Germany lost its main attacker Patrick Thomas due to a serious shoulder injury. In the subsequent matches, Steve Schmutzler, Lukas Schubert and Nick Trinemeier had to compensate for the loss of Thomas, and confirmed their world-class levels. AT first the fans witnessed a powerful start by the Swiss team, pulling ahead early in the match with a 2:0 lead. The Germans could bounce back and narrowed the gap to 1:2 with a superb performance in the third set. The Swiss team kept cool and was all over Germany in the fourth set, extending their lead to 3:1. Despite the set deficit Germany kept up their level, showed no signs of surrender and got back into the game winning the fifth and the sixth set to level the match. Driven by the huge number of fans the German team finished their masterpiece in the deciding set. This epic 7-set win lifts Germany on top of The World Games podium for the sixth time.
“I am speechless after such a game”, Olaf Neuenfeld, the German coach, admitted.
“Winning this game is more than sensational.” Spiker Steve Schmutzler, who scored points with almost every serve during the last set, analysed the match. “We worked hard for winnig set 7. I took a lot of risk – successfully!”
Oliver Lang, the Swiss coach, tried to analyze the reasons for the close defeat: “Probably we are not yet used to winnig such a game. Germany has much experience with such a situation and could only win after Patick’s injury.”

Before the final, Austria and Brazil matched for the bronze medal. The Austrians won 3:2 in an exciting game. Both teams showed spectacular saves and were head-to-head until (11:05, 10:12, 01:11, 12:10, 05:11). The Seleção had to compensate for the loss of Matheus Lammel who had broken his wrist yesterday. Klaus Thaller defends strong and made the difference with a strong performance – Austria took the bronze medal for the third time in a row.

Overall, the spectators of the fistball tournament witnessed exciting matches with the best four teams head-to-head throughout the tournament. “I have not experienced such a balanced performance at the top level for a long time”, German coach Olaf Neuenfeld said already on Monday. In total, more than 3000 spectators followed the competition at the centre court of Olawka stadium throughout the four days of the tournament.

The team around Competition Manager Christoph Oberlehner and Technical Delegate Winfried Kronsteiner, has ensured outstanding conditions together with a team of volunteers from Poland. Even inclement weather on Sunday could not derail the organization, as the games were temporarily moved to court 2.

The preliminary round featuring the six best mens’ teams was incredibly exciting with four squads – Austria, Germany, Brazil and Switzerland – head-to-head until the last matches. In the end, the Austrian team won the preliminary round – the team of coach Martin Weiß only lost its encounter against defending champion Germany. Both, Argentina and Chile did not proceed into the semifinals. However, in particular Chile showed strong form in the first days with close matches against Austria and Brazil. After four days of exciting competition, the Chilean team took the fifth place, following a victory over Argentina.