The Fistball Academy in Winterthur 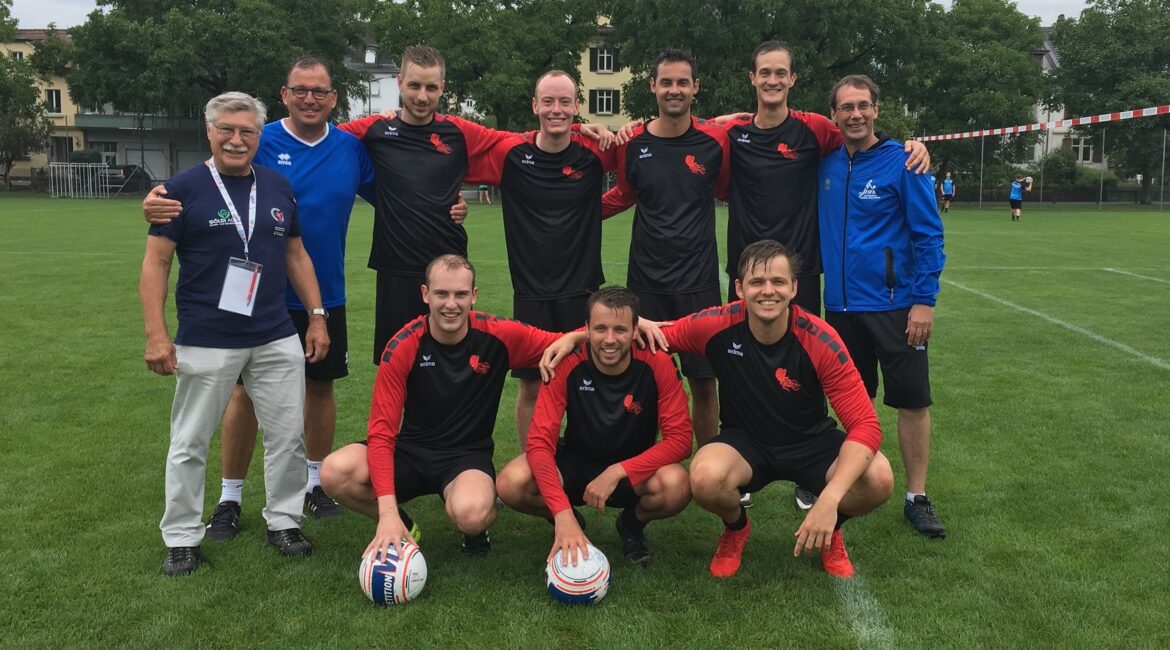 An IFA-leaded training, an academy congress and the advanced training seminar “Train the Trainer” – these were the actions which the Fistball Academy had organised for the teams and interested participants during the IFA Men’s World Championship 2019 in Winterthur.

Even before the start of the World Championships on Sunday, the IFA Fistball Academy had already organized a special training for some teams on Saturday as IFA-Leaded-Training in preparation for the World Championships. The teams from Namibia and Belgium had registered in advance and used the opportunity. With Roland Schubert – at the same time coach of the Danish national team – a very experienced trainer could be engaged for the training. The team from Namibia made the start. The start was in rainy weather with exercises for coordination, followed by tasks to improve defensive skills and reaction.

After two intensive hours the team from Belgium replaced the guys from Namibia. After a short warm-up, similar practices for coordination and defensive skills were on the agenda for the WC newcomer. The young team from Belgium also used the training to get the long journey to the World Championships off their hands. “Both teams were highly committed and had a lot of fun despite the bad weather”, said Uwe Schneider, chairman of the commission of youth and sports and organiser of the Fistball Academy, satisfied. And: Both teams could probably take a lot with them for the tournament. After all Namibia took eighth place and Belgium was 15th at the end of the great tournament – whether it was due to the good preparation for the tournament – who knows …

All the implemented practices and training units were recorded on film and are still made available to all as training skills by the Academy.

On Monday, following the IFA Membership Gathering, the Academy Congress took place.
After welcoming the numerous participants, Jörn Verleger, the designated new IFA President, first presented the IFA’s current strategic plan for the next four years until 2023.
He emphasized that the further development of the Fistball Academy and the introduction of the IFA Development Program are forward-looking components of the IFA’s strategic orientation.

After that Uwe Schneider as head of the commission of youth and sports informed about the current status of the measures of the introduced Fistball Academy as one of the future-oriented services of the IFA. In this context, the main structure, contents and targets of the Fistball Academy were presented. Beside the introduction and organization of a structured own information and knowledge platform in particular new formats for the range of the education and further training are to be developed. In future, training modules will be developed for the respective target groups and subject areas , which will guarantee improved and easier teaching and transfer of training and learning contents in theory and practice by means of detailed presentations and integrated training videos. Furthermore, this segment will be enhanced by the publication of training skills, which will enable easy access to training opportunities and exercises through a simple basic structure and structured division according to basic techniques and skills. In addition, the development of profound fundamentals for an international trainer education rounds off the area of education, so that a sustainable promotion and support of new and young nations is made possible. A first training module as well as the first training skills were presented in the context of the congress. Due to their content and numerous synergies, a close cooperation between the Fistball Academy and the IFA Development Programme is planned.

Roger Willen then presented the IFA Development Programme. The IFA Development Programme is intended to support and promote young and new nations in particular. With the creation of a development plan and the agreement of development goals, the sustainable promotion and dissemination of fistball in the respective nations is to be supported. A special incentive is that the respective nations can reduce their membership fees if the agreed goals are achieved. In addition, the IFA Development Director explained the possibilities of acting as a fistball ambassador for the IFA. With this instrument and program the spreading of the fistball sport is to be supported additionally world-wide. With Tommy Helber, who was the head coach of the Australian national team during the World Championships, the Fistball Academy had invited one of the ambassadors working for the IFA, who at the end of the event reported on his numerous experiences, impressions and his interesting time as a fistball ambassador in Australia.

The very well attended Academy Congress offered all participants an excellent opportunity to inform themselves about the future plans, measures and developments of the IFA. We are very excited to see who we can soon welcome as a fistball ambassador or in our team for the Development Program and the further development of the Fistball Academy. At the end the Fistball Academy had organized the advanced training seminar “Train the Trainer”. The programme included two theoretical and two practical units. With Dirk Schachtsiek as multiple world champion and Hartmut Maus as trainer with decades of experience, excellent experts were invited for the seminar. With participants from New Zealand, Belgium, Switzerland, Germany, Australia, Argentina, Colombia and Austria, the event was filled to capacity.

In the theoretical part, the participants first received information about effective training structures and interesting facts about various attack- and striking techniques. After a short break, the practical training units followed, in which the participants themselves should take part. Thus, in addition to training exercises from the throwing and sprint disciplines, prevention practices as well as tips and tricks for attacking players were presented as a possible training input for fistball, for example, and the participants were then able to try out and train them themselves in groups. Here, too, all exercises were filmed and become part of the training skills of the Fistball Academy. In addition to the many theoretical and practical information, the fun was not missing, so that at the end of the seminar all participants were more than satisfied.

Conclusion:
“All measures of the Fistball Academy – like the World Championships itself – were a complete success,” said Uwe Schneider. “The encouragement and feedback from the participants was more than positive, so that the Fistball Academy will continue to organise such offers and side events in the future. At this point once again we want to thank Roland, Dirk and Hartmut for the preparation and support of the events. Another big thank you goes to the OC team on site in Winterthur, who actively supported and made all measures possible. And I would also like to thank Sönke Spille, who accompanied all three events with his camera“.