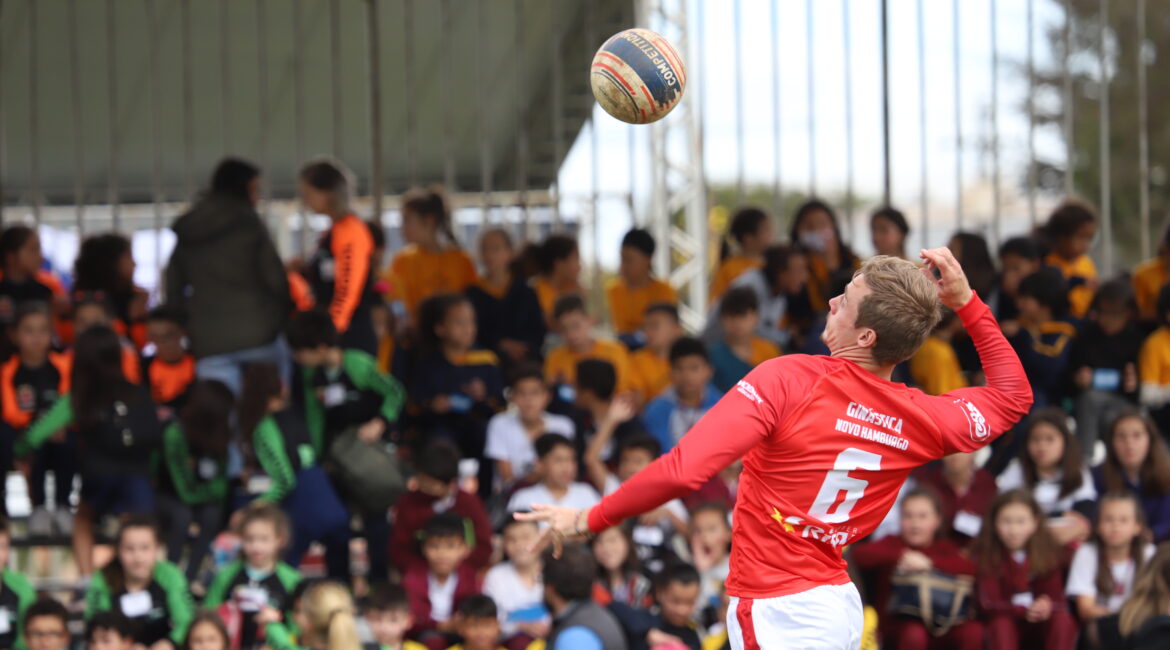 In group A the spots in the semifinals have already been snatched by TV Jahn Schneverdingen and Sopiga Porto Alegre yesterday after winning two out of two matches each. In the head-to-head both teams had the chance to land in first place at the group stage. In a thrilling match Sogipa started furiously and surprised the German defense with a variety of well-placed shots. After winning the first set 11:6 the Sogipa girls had to deal with more resistance on the German side. Long rallies lead to a close 15:14 in favor of the Brazilians. After taking home two sets in a row the game was in the hands of the Porto Alegre girls who once again managed to get in front and secure a 3:0 win with a 11:8 in the last set.

In the match between TSV Dennach and Clube Manquehue the best rank possible for both teams would have been the third in their group. Dennach put in a lot of defensive work and brought their striker into great position while the Chileans had difficulties defending the hard-hit balls. After a closer first set Dennach grew stronger and didn’t give Manquehue any chance to secure a set. With a 3:0 the third place in group A goes to TSV Dennach.

In group B the semifinalists were yet to be determined. As Union Nussbach as well as Duque de Caxias won their first matches both were eager to win the head-to-head. In set number one the Brazilians started better into the game and lead 8:5. The Austrian defence fought back but had a hard time defending the well-placed shots from the Duque strikers. Also, in set number two Duque’s setting and the well placed shots intimidate the Nussbach defense. Only in the third and last set Nussbach can really show off their potential forcing Duques strikers to take more risk on their shots. Still Duque makes the key points and manages to close the set and game with a 15:13.

In the match between Kellinghusen and Novo Hamburgo the German team takes over the lead quickly in set number one turning a 10:4 into a 1:0 set lead. In the following set the Brazilians manage to defend the serves better and a thight match evolves. Nevertheless, it is Kellinghusen again reaching an 11:9. In the last set Kellinghusen takes the lead again, Novo Hamburgo fights back but ultimately must admit defeat.

With two out of two matches won Duque de Caxias only needs to secure a single set against Kellinghusen to reach semifinals. Further in the race for semifinals are the teams from Nussbach and Kellinghusen.

In group A the Austrian teams from Vöcklabruck and Froschberg secured two important wins. Vöcklabruck must have felt pressure playing their second preliminary game against Duque de Caxias after losing the first match against Froschberg. While the first set ended in clear favor for the well-playing home team the following sets show a different picture. With a great team effort Vöcklabruck manages to win the next three sets and leaves the pitch obviously relieved.

Their group opponents from Froschberg meanwhile played their second game against the us-americans from Swim&Sport Club. After winning set one and two the Austrians had trouble closing the game at 10:8 in set number 3 and ultimately lost that set to the euphoric team from the US. In the last set spectators once again see a nice performance from both teams with Froschberg doing the key points and winning their second match 3:1.

The match between Vöcklabruck and Swim&Sports Club ultimately seals both teams’ faith as Vöcklabruck takes the game into its own hands keeps its opponent at a distance. With a 3:0 victory Vöcklabruck qualifies for the semifinals whereas Swim&Sport Club will play for 7th place on Sunday.

In group B the rally for spots in the semifinal really begun with TV Enns and Ginastica Novo Hamburgo entering the tournament. As Pfungstadt won their first match against Stammheim yesterday the ambition to secure a spot in semifinals was high when playing against the Champion from 2018 Ginastica Novo Hamburgo. Patrick Thomas serving for Pfungstadt once again shows off great skills shooting his team to a 1:0 set lead. But Ginastica manages to counter better in set two and put up a fight to unfortunately loose the set 13:11. Set number three was again highly competitive with Pfungstadt eventually using their experience to secure a 3:0 victory. In the meantime, Enns started into the tournament against Stammheim and managed to get in front 10:7. The Germans putting in a lot of effort to reach a 10:10 tradeoff but still having to accept a 10:12 defeat. In set two Enns can live up to their full potential, plays great fistball and wins 11:6. Despite Stammheim trying their best to get a hold of the match Enns is the team making the 11th point in the third set. In the match against Novo Hamburgo though Enns has a hard time keeping up with the speed of the Brazilian attacks. After a closer first set ending 11:9 for Novo Hamburgo the sets two and three showed a clearer picture. Although Enns did their best to stay in the rallies it was Novo Hamburgos strikers who repeatedly scored for their team and take home the first victory. Pfungstadt currently leading the ranking with two wins out of two matches is now followed by Enns and Novo Hamburgo with a win each. Tomorrow morning the last preliminary games will determine the ultimate semifinal qualifiers.