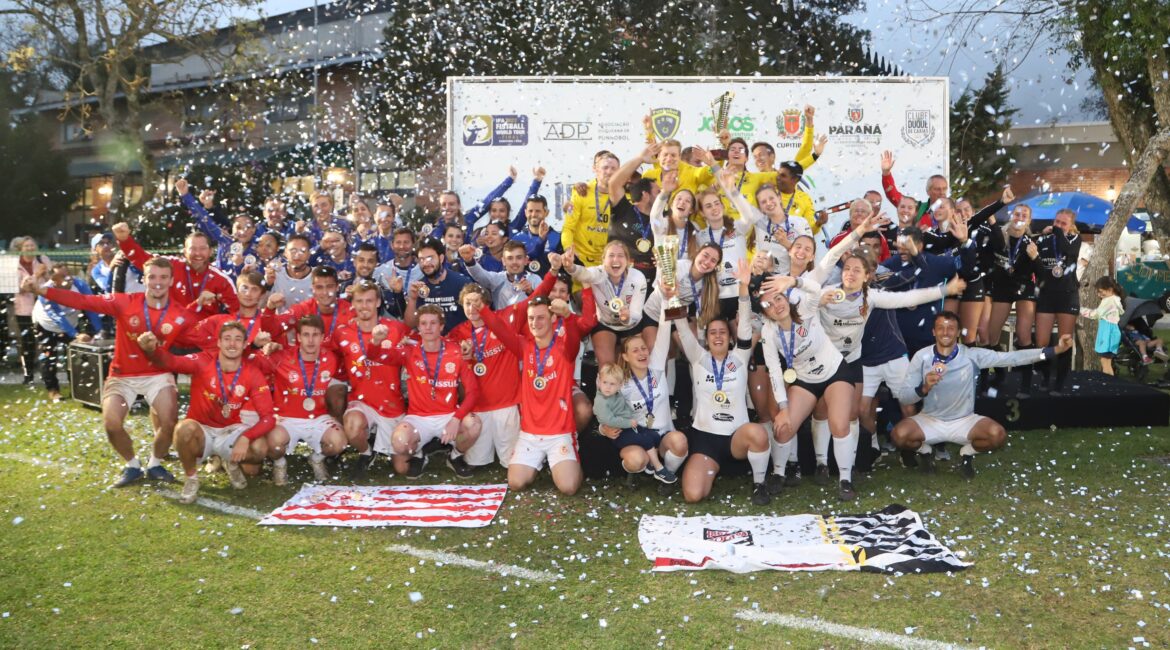 In the bronze match Nussbach met Jahn Schneverdingen. Both lost their semifinals yesterday and besides the frustration still wanted to take home the bronze medal from this world tournament. In set number one the Austrian team finds into the match faster and pressure the german defense with hard hit serves and strikes. But in set number two Schneverdingen defends the first balls to play more direct settings which lead to a 11:7 win. At a 1:1 tradeoff the Austrians find back into the game. As Schneverdingen has trouble to set the balls Nussbach shows a great performance and overruns the german team with 11:3. But the European champion Schneverdingen has not yet had enough and puts it all into set number four securing a close 11:9 win. Winged by the set tradeoff the Germans grow to their full potential and leave Nussbach at a 4:9 disadvantage to finally win the decider and the bronze medal with 11:6.

In the women’s final Sogipa Porto Alegre met the home team Duque de Caxias. As previously in the men’s bronze match the Duque fans pushed their team to a great performance in the first set leaving Sogipa behind 10:4 and winning the first set 11:6. In set number two Sogipa finds into the game showing spectators the except opposite of set number one leading 7:0 and winning the set with the wind in their back 11:3. With the Sogipa Fans going crazy on the stands the Duque team has a hard time finding back into the game. Powerful shots and excellent defense on Sogipas side enables the Sogipa girls to win set three and four 11:6 and 11:7 making them World champions for the third time in club history. The men’s game for third place was played between the Tigers Vöcklabruck and the home team from Duque de Caxias. The game was thight from start to finish with Vöcklabruck reaching the two-point difference in the first set leading 1:0. In set number two Vöcklabrucks unforced attacking errors combined with great defence it is Duque reaching the 1:1 tradeoff. Again, Vöcklabruck finds back to its strengh scoring regularly with the serves turning an 8:5 lead into a 11:9 win. But Duque de Caxias fueled by its fans still gets back up and surprises the Austrians with great shots and long rallies to force a decider. In the decider the home team surpasses itself and plays their best fistball leaving Vöcklabruck little chance and securing the bronze medal.

In the men’s final the qualifiers from 2019 have once again managed to reach the final in 2022. It is once again Pfungstadt the defending champion playing against the young team Ginastica Novo Hamburgo. Starting into set number one the Brazilians seem to be nervous making unforced errors that allow Pfungstadt to win the first set 11:9. In set two the Germans are again the more consistent team leaving Novo Hamburgo behind 7:3 and winning the second set with a return error by Novo Hamburgo. In set three Novo Hamburgo finally gets a hold of the game and keeps it open until Patrick Thomas finally seals Pfungstadts victory on the return to win the set 13:11 and the game 3:0.