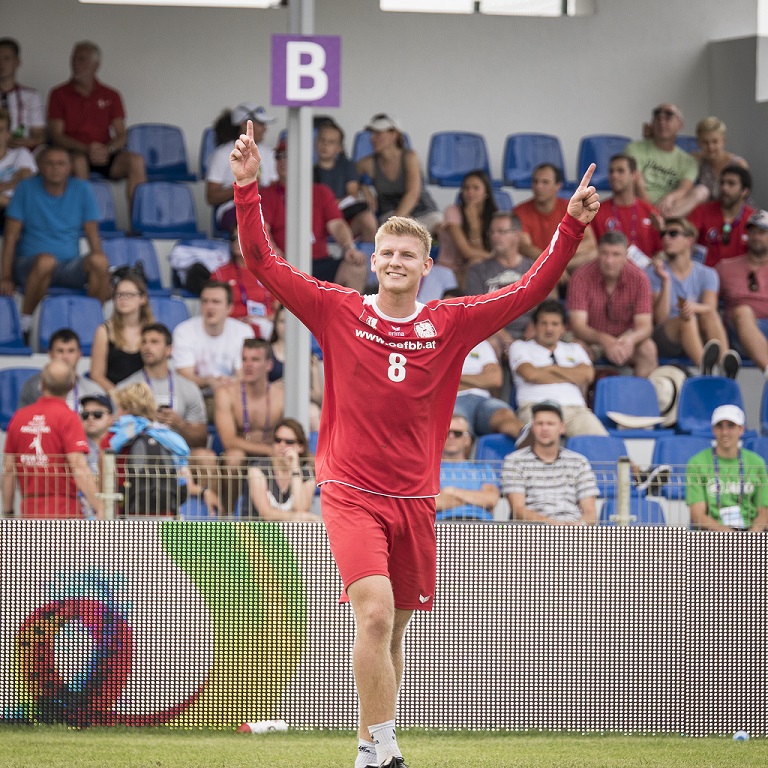 The fistball tournament at The World Games started with surprises. While defending champion German is only ranked fourth, Austria and Brazil are leading in the interim standings with two victories each. The first day of the competition was overshadowed by a serious shoulder (i.e. acromioclavicular joint) injury of Germany’s star player Patrick Thomas.

Germany – Argentina 3:0 (11:01, 11:06, 11:08)
The opening game of the fistball tournament at The World Games was just in its early stages when the spectators in the Olawka stadium witnessed an accident with consequences. Defending an Argentinian attack, Germany’s Steve Schmutzler and Patrick Thomas crashed into each other. Thomas, two-time world champion from Pfungstadt, was brought to the hospital where doctors confirmed a serious shoulder, i.e. acromioclavicular joint, injury. He will thus not be able to play in the subsequent games of the tournament – a heavy blow for the German team.
Nevertheless, the team of national coach Olaf Neuenfeld won the match against Argentina without losing a set.

Switzerland – Brazil 2:3 (11:06, 07:11, 11:09, 08:11, 11:13)
The most spectacular encounter happened in the second match of the day, between Switzerland and Brazil. Reigning vice World Champion Switzerland took the first set, and the strongly playing Brazilians equalized in set two. The match continued at world-class level until the fifth set where the Seleção had the upper hand with 13:11.

Austria – Chile 3:2 (08:11, 09:11, 11:09, 11:08, 11:05)
In the match between Austria and Chile, the spectators in the Olawka stadium almost witnessed the second South American victory of the day where the strong Chilean team controlled the game until three quarters of set three. On his birthday, Austria’s captain Jean Andrioli played below his standard and was substituted at 0:2. The Chilean team played a sensational match and already led 9:7 in the third set when the young Austrian team bounced back and secured a 3:2 victory.

Brazil – Argentina 3:1 (11:07, 07:11, 11:08, 11:05)
The Seleção underlined its title ambitions also in its second match and won its encounter with neighboring country Argentina with 3:1. While the Argentinian squad equalized to 1:1, Brazil never lost control of the game and drove home a clear victory. The Brazilians are hence ranked second after the first day of the tournament.

Germany – Austria 1:3 (08:11, 11:09, 08:11, 06:11)
The German team still had to digest the loss of attacker Patrick Thomas due to his serious injury suffered in the opening game. In addition to this, the Austrian team was euphoric from its earlier victory over Chile. The game was open until 1:1 in sets when the Austrians around the young attackers Gustav Gürtler and Martin Pühringer took control and drove home a 3:1 victory. With their first win over Germany in a major tournament since the European Championship in 2012, the Austrian squad is leading in the interim standings after the first day. Defending champion Germany is currently only on the fourth place.

Switzerland – Chile 3:0 (11:04, 11:03, 11:08)
The Swiss national team celebrated its first win in the tournament with a success over Chile. In the first two sets, the Chilean squad barely stood a chance. While the South Americans came better into the game in the third set and fought hard, they eventually lost 0:3 in sets.