“Fernando Flying Circus” Ready to Take Off in Wroclaw 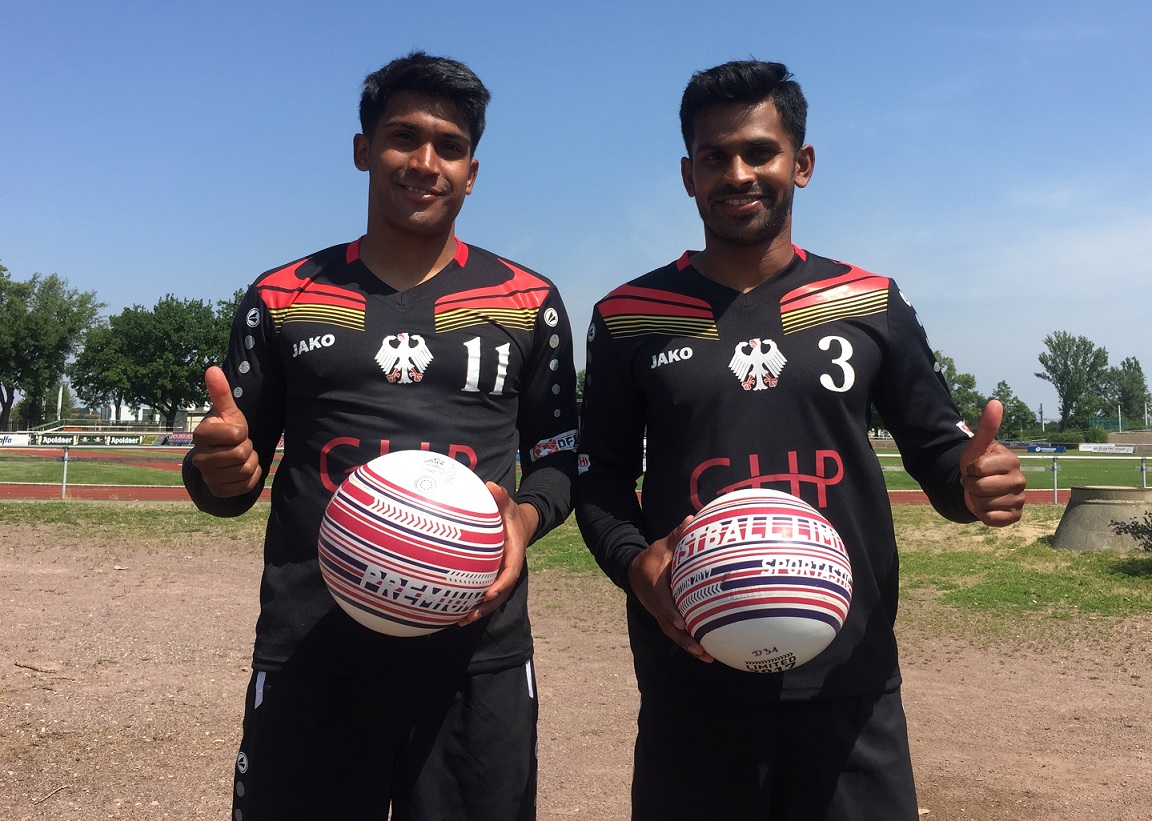 Ten times German champion in a row, Champions Cup winner, World Cup winner – German side TSV Pfungstadt is currently the most successful team in men’s fistball. It hence comes as no surprise that many players from Pfungstadt have made it to the team that will be representing Germany at the upcoming World Games in Wroclaw, Poland, where the fistball tournament will be played from July 22 – 25. Besides Oliver Späth and  two pairs of brothers have qualified for the German squad – Sebastian and Patrick Thomas, and, Ajith and Andrew Fernando.
The two Fernando brothers have gained reputation for their spectacular defense work, showing “flying” stunts. Now the “Fernando Flying Circus” is ready to take off again in Wroclaw.

It all started at the TSG Tiefenthal. The Fernando brothers lived only two kilometers away from the team’s grounds, where Ajith started playing fistball, and later brought Andrew along. “The coach asked Ajith one day if his younger brother would like to play fistball, too”, remembers Andrew. Shortly after, Andrew came along for his first training, and was immediately fascinated by fistball, in particular the sport’s athletic and dynamic. “I found it incredibly fascinating when a defender had to dive for a ball”, adds Andrew, who is now 27.
With Tiefenthal, the Fernando brothers participated in their first German youth championships. Then, Ajith moved to Pfungstadt for work. “One could sense at the time that Pfungstadt will be a team of the future”, says Andrew, who joined TSV Pfungstadt shortly after his brother – due to a coincidence: Ajith had forgotten his mobile phone at his younger brother’s place. Thus, Andrew picked up the phone when Ajith’s coach in Pfungstadt – Dieter Thomas – called. In the following conversation, Thomas “asked me if I would like to join their side. That’s how it all got started”, says Andrew.

While the change of sides meant that he also had to step down into the second league, he now was playing again together with his brother Ajith. “My brother and I have now played together in the same team for about ten years. Only very rarely does one wish this is not the case”, says Andrew.
They have played together in great fistball events. “There are so many impressive events in fistball. Each championship is great. But if I had to choose the most impressive experience, I would pick our participation at the World Cup in Namibia – despite losing the decisive set. The whole trip, with the following vacation, was a particularly impressive experience”, states Andrew.
Since 2016, Ajith and Andrew are also playing together for the German national team. In Grieskirchen, Austria, both Fernando’s were members of the winning squad. And now they are prepared for their next event, says Andrew. “We want to win at the World Games! We will give our very best for this”.

Besides the current national team players Patrick and Sebastian Thomas, and earlier Niels and Jan Pannewig, Ajith and Andrew Fernando are the third pair of brothers that is playing together in the German national fistball team at a global event.