Fistball in Western Australia – A Boulder Man and His Hopes 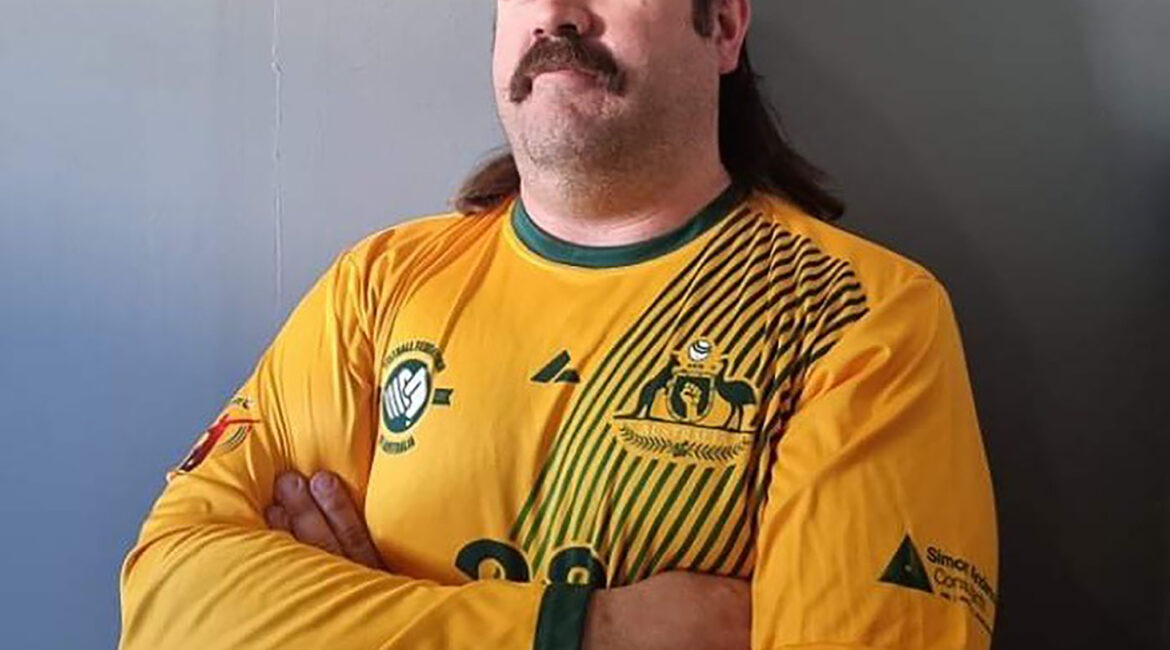 Benny Giles is 36 years old and works as a fitter/machinist in the mining industry in his Western Australian hometown of Kalgoorlie-Boulder, approximately 600 kilometers east of Perth. In his free time, he is a passionate fistball player and assistant coach of the Australian men’s team – with hopes to win the next Trans-Tasman Fistball Championship in 2022. A feat that the Aussies have already accomplished twice – winning the Trans-Tasman title in 2017 and 2018, respectively.

From fan to player
A few years earlier, Giles first got in touch with fistball – through his cousin, Australian pioneer Malcolm Donnellon. He was immediately a fan of the game, and after some time following the sport, the former amateur Australian football and field hockey player tried it for himself, “I started playing fistball in September 2018, for the Westside Wombats in the Victorian Fisball League (VFL). I mainly play in defense – left or right.” Giles quickly showed promise and hopes to make his debut for the Australian national team next year – which is even more remarkable when one considers that Giles lives around 2,500 kilometers away from his Melbourne-based VFL team, meaning he needs to make weekend roundtrips by plane to be able to train and play with his squad.

Establishing fistball in Boulder
Before Covid-19, Giles tried to make the trip to Melbourne at least once a month. Currently things are more complicated due to the pandemic, “For some time, there were no flights, and Covid also stopped VFL temporarily from happening in Melbourne – which has pushed me more to try get something going back home.” Back home – that is again Kalgoorlie-Boulder, where Giles serves as president of the Boulder Fistball Association, and coach and player of the Boulder Bungarras, currently the only team in town. “Fistball in Boulder is in its infancy. At the moment we are just trying to lay down the basic rules and skills. We only have a handful of players”, says Giles, who nevertheless is hopeful that things will pick up. “A constant level of players would be nice. A 4-6 team competition, hopefully. If we can have a strong enough team one day that can travel to Melbourne for a weekend, I’d love to have the Bungarras play at least one round in the VFL.”

Coaching career
Giles joined the Australian men’s national team as coaching staff under head coach Tommy Helber in early 2019, and travelled with the squad to Winterthur, Switzerland, for the World Championship that year. “The World Champs were awesome! My first ever trip overseas. I got to see a small slice of the world with some great mates, and meet some equally great people. We never felt out of place, always welcome”, remembers Giles.
He now is the team’s assistant coach. As mentioned, the next goal for the Australians is to win again the Trans-Tasman Championship. And, in the long run, establish a strong squad for the future, “Getting more junior players is definitely our main goal at this time. The current group of players are not getting any younger. Fingers crossed.”