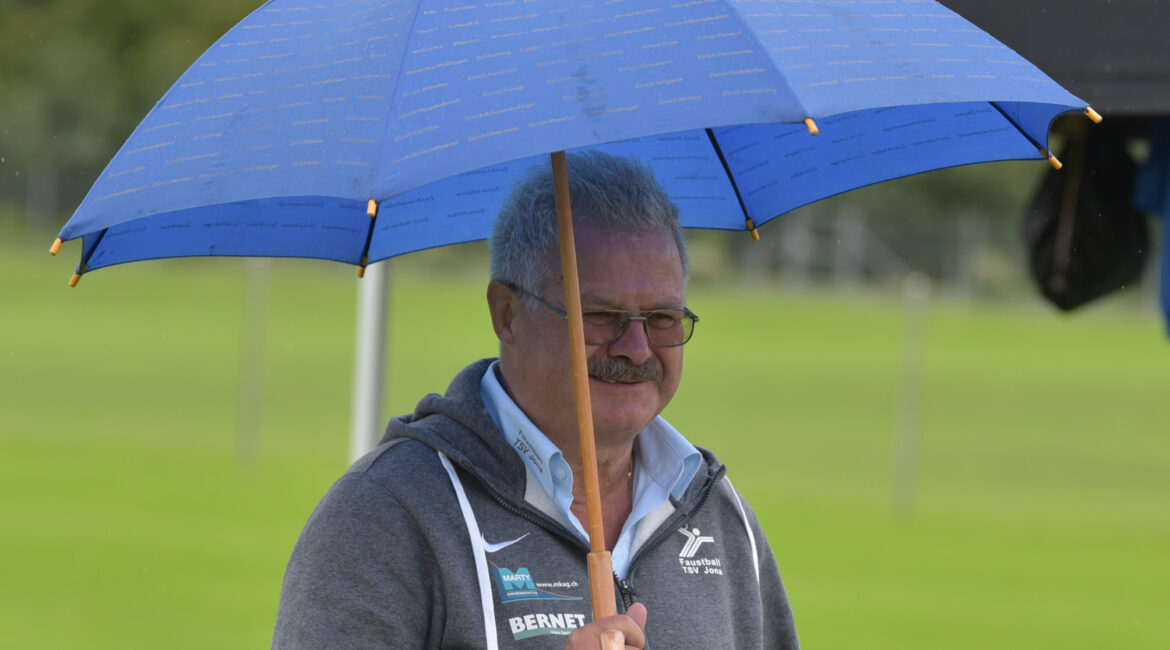 When it comes to setting new standards in the sport of Fistball, Karl “Charly” Raymann has always been at the forefront. As an active player and sports official, he has been passionately committed to the sport of Fistball for over 50 years – and not only in Switzerland.

Promotion to National League A 1977

In addition to the playing field, Charly has been involved since 1983 as head of the organising committee of one of the most famous Fistball tournaments in the world, the Raiffeisen Obersee Masters. Over 100 teams regularly take part in this tournament and in 2019, in the run-up to the World Championships in Winterthur, Charly managed to unite teams from 12 nations for peaceful competition!
Since the mid-80s, Charly has built up important international contacts on his Fistball trips. Whether in Europe, South America or southern Africa, Charly Raymann is known and appreciated in Fistball circles worldwide.

Charly on the road worldwide in matters of Fistball

In 1989, on Charly Raymann’s initiative, a Fistball team was founded within TSV Jona, which he presided over until 2008.
From 1990 to 1997, Charly Raymann was also president of the FAKO-CH, the predecessor organisation of Swiss Fistball and in this function also a member of the International Fistball Federation IFV.

It was also on his initiative that the CFFN, the Club Freunde der Faustball-Nationalmannschaften (Friends of the National Fistball Teams Club) was founded in 1991, which is now the most important financial backer and support association for the Swiss national Fistball teams.

Countless official IFV AND IFA events were organised and carried out under his leadership in the Grünfeld Fistball stadium in Jona. Charly always guaranteed a smooth organisation and unforgettable events.

For his great commitment, he was elected “Official of the Year” in Switzerland in 2007.

He also showed a lot of commitment on the Fistball court. He won no less than 6 Swiss senior championship titles and took part in many national and international tournaments. The Senior World Games, which were later renamed the “IFA Fistball Masters World Cup”, were his initiative.

Another highlight for Charly was to be the Women’s World Championship 2021 in Jona. As General Secretary of this event, he was on track with the planning and financing for an unforgettable event when the Corona restrictions in Switzerland in June made it impossible to hold it.

In the summer of 2021, he has finished his active career as a Fistball player together with his teammates. However, he will continue to be present at the important Fistball events and will also be available as a busy OC boss for the Obersee Masters and hopefully other events.

Charly Raymann is a tireless worker with a lot of passion and commitment who subordinates almost everything to the sport of Fistball and with his international contacts contributes to the fact that the Fistball movement is constantly growing worldwide and coming closer together. The IFA 2021 OLYMPIC EDUCATION IN FISTBALL AWARD seeks to recognize actions that use fistball as a tool, in the field of developing the central Olympic Values of Friendship, Respect and Excellence.

IFSUL Camaquã, a public school located 125 km south of the capital Porto Alegre in Brazil. Even during the COVID-19 pandemic, he and the school team organized and executed in remote teaching virtual classes to preserving people’s health as priority. In 2021 two events stood out, but the main one was: “Fistball environment in discussions with cross-sectional educational themes”, keeping the flame to use fistball as tool to work with Olympic Values alive, that should be present in the educational training of all kid and adults.