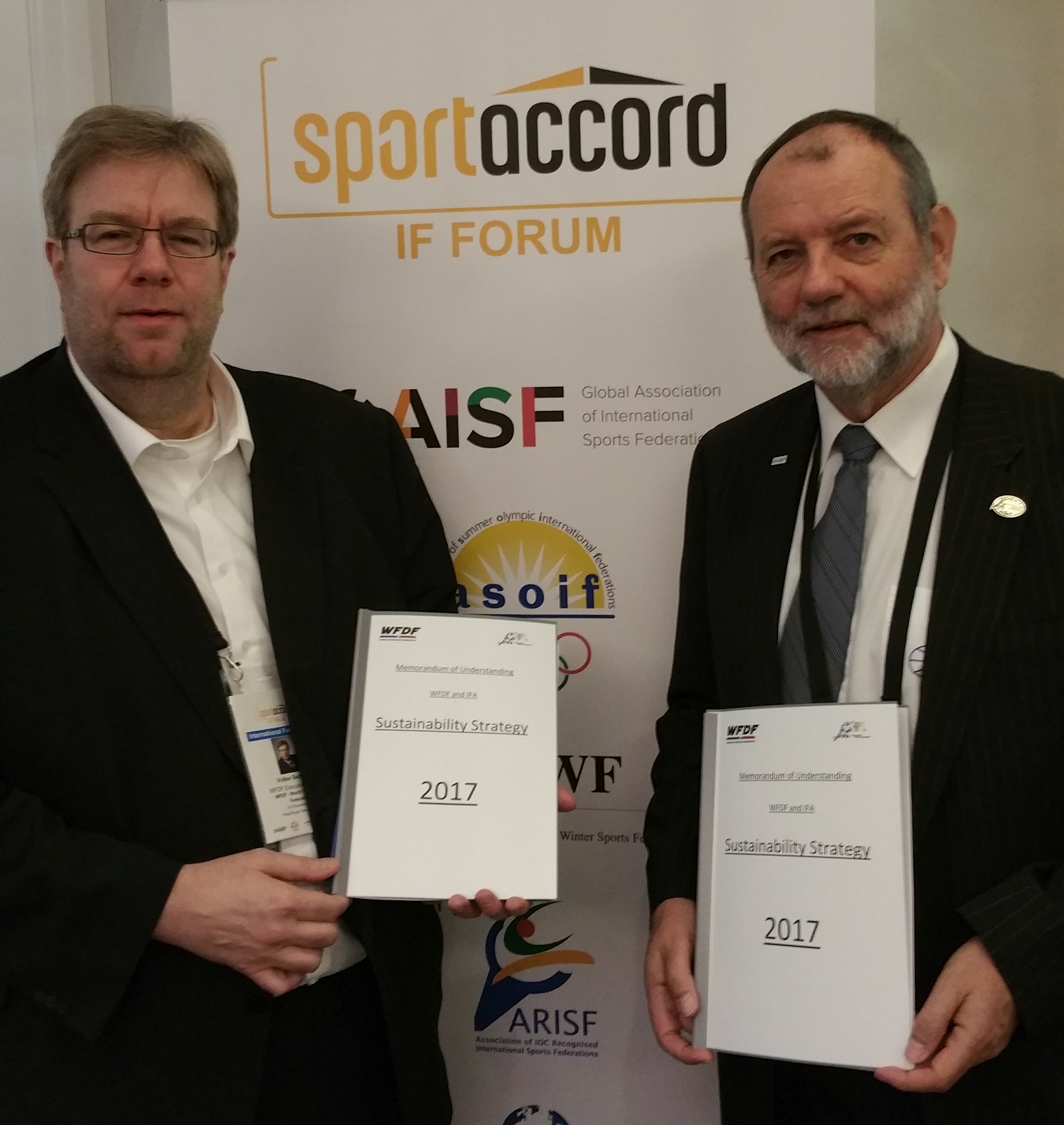 A joint sustainability strategy was unveiled in the collaboration between the two partners, who presented their case study developed with the IOC during the International Federations Forum last week in Lausanne – where sustainability was the central theme.

WFDF and IFA will collaborate under three principal initiatives. These are: “committing to sustainability as part of their governance,” “providing resources for the development and implementation of a sustainability strategy,” and “conducting sustainability at all events.”

“WFDF is pleased to establish this cooperation agreement with IFA on sustainability, building upon consultations with them on anti-doping, ethics and governance, or para-sport activities,” commented WFDF President Robert “Nob” Rauch on the occasion of the signing of the MoU. “This project is very special, not only to WFDF but to our member associations benefiting from the work we are doing on sustainability as their IF. It is about teaming up to leverage the limited resources we have to do a better job on this important matter, and ensuring that our partners and stakeholders do the same, because together we can make a difference.”

“It is more effective if smaller Federations such as ourselves work together to achieve these common goals,” stated WFDF Executive Director Volker Bernardi. “This shows how much we can do. We have targeted Sustainability altogether because it is a main pillar of the Olympic Agenda 2020.”

“The signing of the MoU underlines our long-term cooperation with WFDF. We are sure that, particularly for AIMS and ARISF member Federations, such cooperation can be quite helpful in fulfilling our commitment to stage sustainable world events,” stated IFA President Karl Weiss, who is also member of the AIMS Council.

“The key factor is that we realized that the challenges for our two federations are materially the same: both team sports are mainly played outdoors; both are fast-growing and with a great youth appeal; both are developing well and on the move for their next step in the Olympic Movement; both are considering corporate responsibility and Sustainability as a key element of all events,” stated IFA Secretary General Jörn Verleger.

In showing their respective commitment, WFDF is represented by Sustainability Officer Johanna von Toggenburg, and the IFA has appointed Sustainability Ambassadors Ines Mayer and Patrick Thomas.  Von Toggenburg added: “Several ways to improve sustainability at competitions were recently tested by WFDF at our World Championships of Beach Ultimate (WCBU) held in Royan, France, in June this year. This included environmental measures like the use of reusable cups, plates and cutlery for athletes — reducing waste by more than 50% — as well as making available bicycles for athletes and volunteers for local transportation. Educational activities were also provided for the local community, adding up to the integrated event approach for WFDF, and followed up with an event assessment as per recognized international standards.”

The IOC recognized the “Teaming up for Sustainability” of IFA and WFDF with a case study that was presented within the framework of the IF Forum.