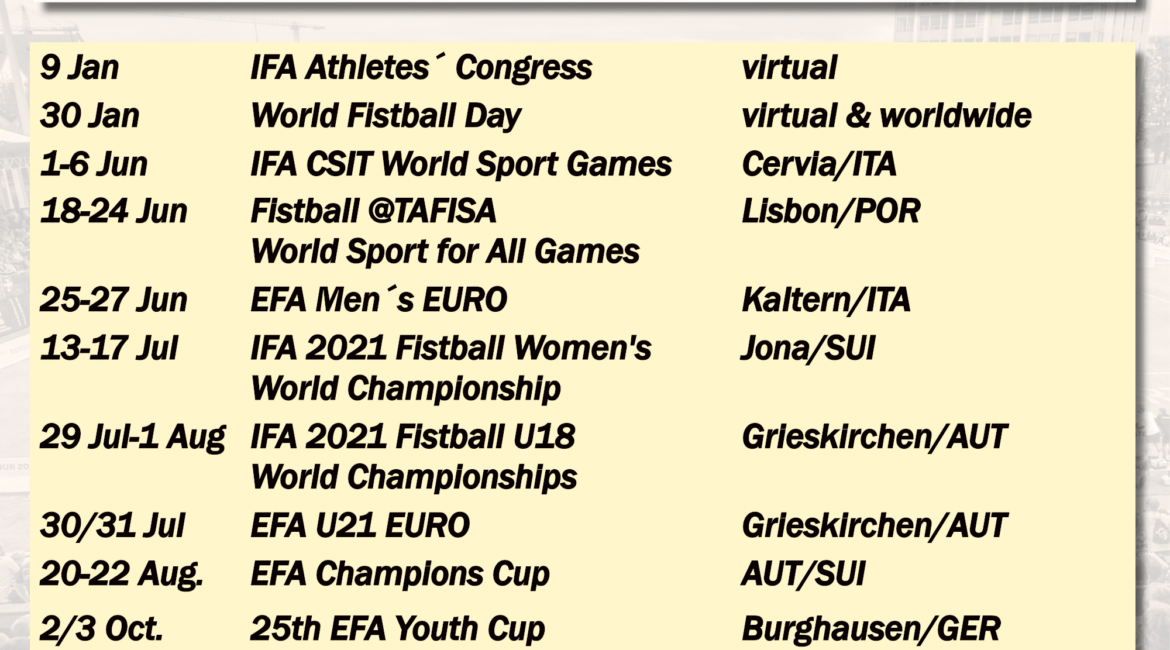 At the beginning of the year we hoped to strengthen our position within the sports family by:
– World Class Events
– Global Growth
– Women in Sports
– Teaming up
– Showing our great media potential

But it looked different to what we had hoped: Lockdown. Training bans. Sanitation everywhere. No spectators in the venue. Canceled championships. Broken dreams. Season resumptions. Season can-cellations. The COVID-19 year 2020 has confronted Fistball – at the top as well as sports for all – with unprecedented challenges.

The world has stood still as rarely before, and yet it is in turmoil. The effects of the pandemic were and are catastrophic. The economic slump is enormous, unemployment has risen sharply, and many are on short-time work.

Hundreds of thousands of people have died from the disease worldwide and we can only speculate about the long-term effects on health that will result from the disease and the loss of sporting activi-ties.

And it is far from over. It is clear that the consequences of the pandemic will accompany us for years to come. But it is also clear that there will be a time after COVID-19.

It has been the biggest challenge in decades

The COVID-19 crisis poses an enormous challenge to humanity, probably the greatest in decades.

It has forced us to rethink what we usually take for granted and routines in our professional and per-sonal lives.

John F. Kennedy often pointed out in his speeches that the Chinese character for crisis contains two syllables that, read individually, mean the words danger and opportunity. While this might not be one hundred percent correct linguistically, there is something to it in terms of content, including the COVID-19 crisis.
Despite the long standstill in sport, the postponement or cancellation of almost all major sporting events, the continued uncertainty and all the restrictions, 2020 was also a sporting year with many hopeful signs, of friendship, solidarity and new initiatives e.g.

– IFA expanded its portfolio as service provider for its member federations and event organizers,
– IFA updated its Sustainability Policy and committed itself as an association to reduce the emissions of greenhouse gases caused by IFA by 4.5 percent annually over the next 10 years as part of the “Race to Zero” initiative,
– IFA approved the new IFA Safe Sport Policy to provide athletes of all ages with appropriate safety and protection,
– IFA adopted a new Anti-Doping Code based on the new WADA World Anti-Doping Code 2021 and
– IFA was accepted as partner of the project “International and European Sport Organisations Activate Citizens” selected by the European Commission and co-funded by the Erasmus+ Programme of the European Union in 2021 – 2022. Furthermore we invite you to plan and run activities around the IFA´s 61st birthday on 30 January 2021, which will be celebrated as the newly established World Fistball Day every year in the future.

We very much hope that we can celebrate together again at next year´s competitions like the IFA Women´s World Championship, which was awarded as a result of this year´s cancellation to Jona (Switzerland), at the U18 World Champs in Grieskirchen (Austria) or the 2021 World Tour Finals.

The 7th edition of the CSIT World Sports Games (WSG) will be hosted from June 1 – 6, 2021 in Cesenatico and Cervia (ITA) and IFA will conduct the IFA CSIT 2021 Fistball Amateur World Cup within the WSG. Fistball will also be part of the 7th TAFISA World Sport for All Games, that will take place in Lisbon, from June 18 – 24, 2021. It will be a spectacular event that brings together color, dance, games, culture and promotes peace, friendship and lots of fun to which Fistball has been invited as a tradi-tional sport to the sport demonstration and competition program. The TAFISA Games typically attract up to 50,000 participants and visitors from up to 100 countries, and are sponsored by the Interna-tional Olympic Committee and UNESCO.

Next to others like the EFA Fistball Men´s European Championship in Kaltern (ITA) we have a lot of plans for 2021 which hopefully can be run, but the most important thing is, that you and your loved ones stay healthy.

We would like to thank so much you for your friendship and support in 2020.