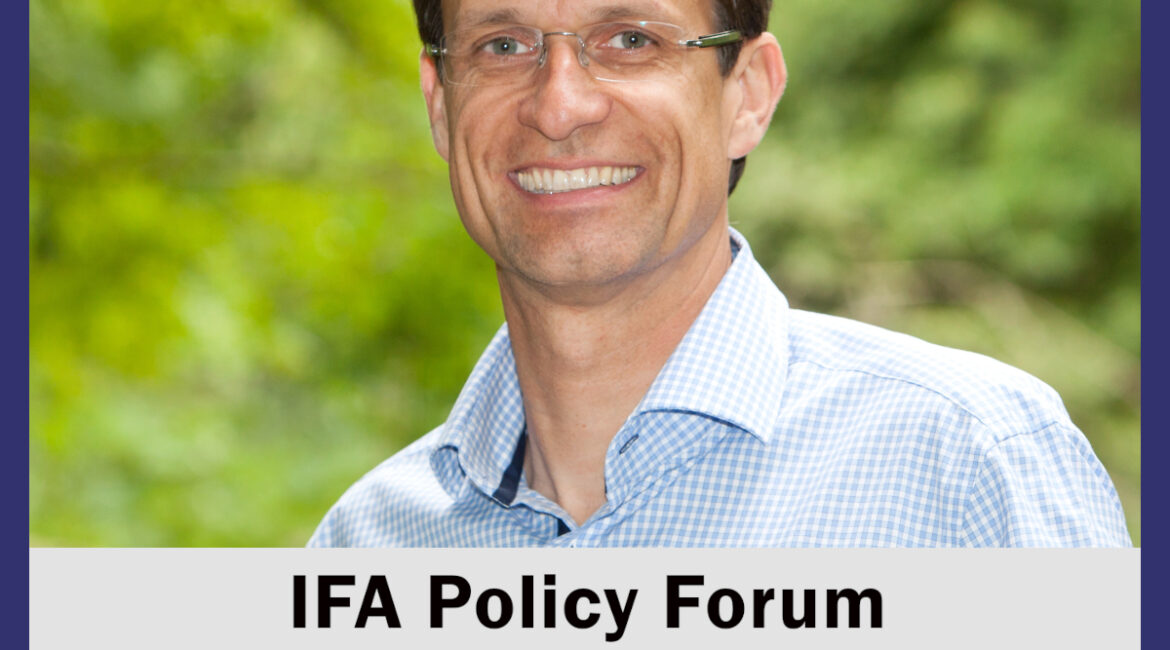 The IFA Policy Forum, held for the first time on March 30, focused on the requirements for world sports federations after the COVID-19 crisis, based on the IOC’s recommendations in Agenda 2020+5.

The 30-minute keynote address was given by Prof. Dr. Holger Preuss, member of the IOC Legacy and Sustainability Commission, after a welcome message by AIMS (Alliance of Independent Recognised Members of Sport) President Stephan Fox. Invited were members of the worldwide fistball family as well as representatives of the AIMS umbrella organisation. IFA President Jörn Verleger welcomed, among others, the Presidents of Sleddog (IFSS), Helen Lundberg and Savate (FISav) Dr Julie Gabriel as well as Powerlifting (IPF) Secretary General Robert Keller.

The forum was conducted within the framework of the annual evaluation of the current Strategic Plan 2019 – 2023, which was approved in 2019, and is to be evaluated annually at the second meeting of the IFA Board of Directors. For this purpose, a public IFA Policy Forum was organized prior to the IFA Board meeting scheduled for April 17, in which all member federations and stakeholders will have the opportunity to participate in the discussion on the future course of the IFA. The current COVID19 pandemic is not included in the 2019 – 2023 Strategic Plan, but will have a profound impact on the implementation of the plan in the coming years. In addition, at its 137th Session in March 2021, the IOC unanimously approved a new IOC Strategic Roadmap to 2025, called Olympic Agenda 2020+5. This will also have an impact on the IOC Recognition Process.

The Olympic Agenda 2020, which was based on the three pillars of credibility, sustainability and youth, had been adopted by the 127th IOC Session in Monaco in December 2014. The aim of the agenda has been to highlight Olympic values and strengthen the role of sport in society. The biggest advances have been in the Olympic Games, athletes and their protection, good federation governance, solidarity within the Olympic Movement, creating long-term financial stability for the Olympic Movement, the role of sport in society, sustainability and gender equality. The creation of the Olympic Channel is also among them.

While the world is currently dealing with the global health crisis with the COVID 19 pandemic and its consequences, the IOC is also focusing on further change, building on the success of the Olympic Agenda 2020.
The 15 recommendations of Olympic Agenda 2020+5 are based on feedback from the Olympic Movement and five key trends that will be important in the post-Corona world. This is where sport and Olympic values can play a key role in turning challenges into opportunities.

The key trends on which the Olympic Agenda 2020+5 is based are:
– more solidarity within and between societies,
– the growing digitalization, without losing sight of the lack of digital infrastructure in some parts of the world,
– the urgency for sustainable development,
– the need to strengthen credibility of organizations and situations, and the need to achieve stability in the face of the financial and economic consequences of the COVID-19 pandemic. These financial and economic consequences will shape the priorities of governments and businesses in the coming years.

The 15 recommendations of Olympic Agenda 2020+5 are based on these five trends and include concrete approaches. The IOC and the Olympic Movement should:
– Strengthen the uniqueness and the universality of the Olympic Games
– Foster sustainable Olympic Games
– Reinforce athletes’ rights and responsibilities
– Continue to attract best athletes
– Further strengthen safe sport and the protection of clean athletes
– Enhance and promote the Road to the Olympic Games
– Coordinate the harmonisation of the sports calendar
– Grow digital engagement with people
– Encourage the development of virtual sports and further engage with video gaming communities
– Strengthen the role of sport as an important enabler for the UN Sustainable Development Goals
– Strengthen the support to refugees and populations affected by displacement
– Reach out beyond the Olympic community
– Continue to lead by example in corporate citizenship
– Strengthen the Olympic Movement through good governance
– Innovate revenue generation models

“The COVID-19 crisis has changed our world,” said IFA President Joern Verleger. “We are therefore well advised to adapt our Strategic Plan and prepare for the new normal. In doing so, we want to involve all member federations and stakeholders in the discussion.”

Of the 15 IOC proposals, the following 11 are of particular importance for the work of the IFA:
– Forster sustainable sporting events
– Reinforce athletes’ rights and responsibilities
– Continue to attract best athletes
– Further strengthen safe sport and the protection of clean athletes
– Harmonisation of the sports calendar
– Grow digital engagement with people
– Strengthening the role of sport as an enabler for the UN Sustainable Development Goals
– Supporting refugees and populations affected by displacement
– Promoting corporate citizenship
– Good governance
– Innovative revenue generation models

The IFA admits the principles of a free democratic basic order and safeguards the sport of Fist-ball against all forms of violence, discrimination and illegal betting and match fixing.
To this end, the IFA Board of Directors has adopted a comprehensive set of rules that is regularly evaluated and revised. Therefore, updates of the following regulations will also be discussed during the forum:
– IFA Code of Ethics (approved 20 June 2015)
– IFA Conflict of Interest – Policy (approved 20 June 2015)
– IFA Code of Conduct on Sports Betting Integrity (approved 15 January 2016)
– IFA Rules against illegal and irregular betting and match-fixing (approved 15 January 2016)
– IFA Guidelines for the Conduct of the Athletes’ Entourage (approved 20 June 2015)
– IFA Athletes’ Commission Election Procedure 2019 (approved 4 April 2019)
– IFA World Games selection and qualification criteria (approved 4 November 2018)

An overview of all rulebooks can be found at: https://www.ifa-fistball.com/governance/