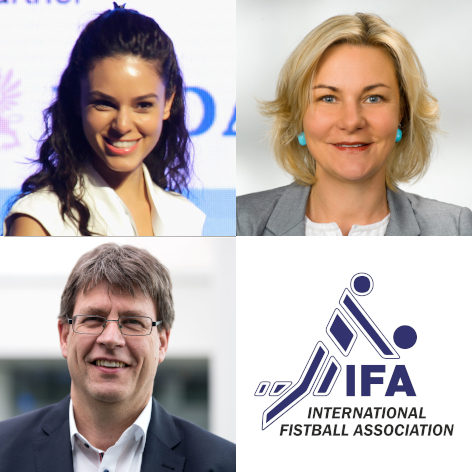 Today the IFA Board of Directors conducted its 4th meeting since the election in Winterthur (SUI) last year in August.

The Board decided about the composition of several IFA commissions. The IFA Youth Commission is composed by chairman Uwe Schneider (GER), Cory Dahn (USA), Verena Hieslmaier (AUT) and an Under 18 representative, who will be elected by the players participating in the IFA 2020 U18 Fistball World Championships in Grieskirchen (Austria). The IFA Ethics Commission is composed by Petra Huber (Secretary General of the Austrian NPC), Thomas Weikert (International Table Tennis Federation ITTF President) and Julia Govinden (CEO of United through Sports) as chairwomen. As a new commission the board established a Sustainability Working Group and asked all member federations for proposals. The board decided unanimously to sign the Sports for Climate Action Framework and approved the first ever IFA 2019 Sustainability Report

Furthermore, the Board established a working group to prepare a decision if their should be a common men´s and women´s world championships 2023 in Mannheim. Currently there will be the women´s event at The World Games 2021, as well as IFA Fistball Women´s World Championships in 2022 and 2024 as well as a possible women´s event at The World Games 2025 in China.

Finally the IFA Board of Directors nominates IFA President Jörn Verleger as candidate for the position as AIMS Secretary General. The Alliance of Independent recognised Members of Sport (AIMS) was found in 2009 by the non- IOC recognised members of GAISF. Currently, AIMS has 18 sporting international federations as full members. The AIMS President is the General Secretary of IFMA, Stephan Fox. The AIMS Statutory Ordinary General Assembly will be held on Tuesday 21st April 2020 in Beijing and elect a new AIMS Council following the end of the current council’s term. Currently the former IFA President, IFA Honorary President Karl Weiss IFA represents IFA in the AIMS Council.