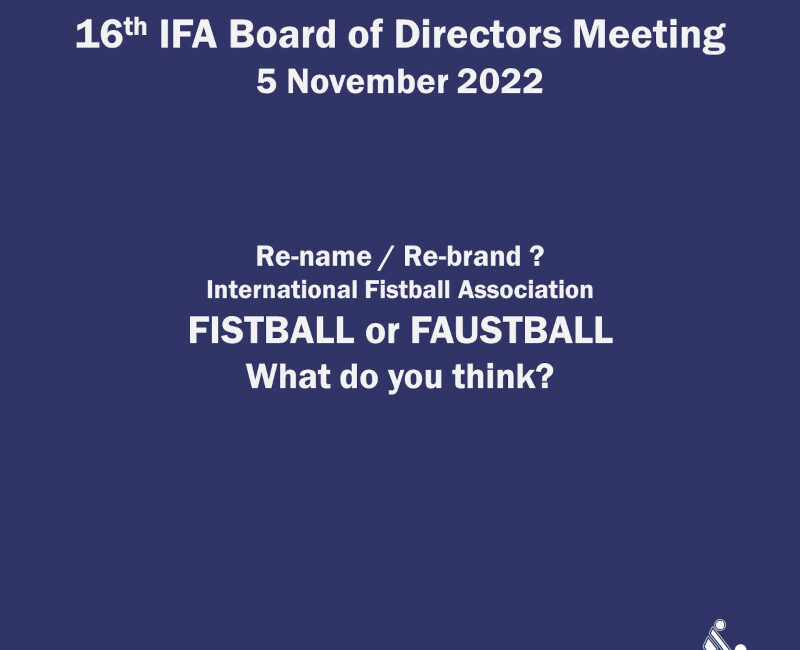 In its yesterday’s board of Directors meeting the International Fistball Association (IFA) established a working group to prepared a decision if the organization should rename and/or rebrand the sport worldwide to Faustball? After The World Games in Birmingham/Alabama IFA received remarks and questions why different names are used for the sport like punhobol, fistball, Pallapugno and Faustball. Seven members including President Jörn Verleger, Secretary General Christoph Oberlehner, PAFA President Gastao Englert, Valentin Weber, Chairman of the IFA Communication Commission, English native speaker IFA Vice President Vikki Buston and board member Blase Dowall as well as further marketing experts are members of the group to develop a proposal for the next board meeting on 11th of December.

As new Chairman of the IFA Sports Commission the board welcomed Gastao Englert From Brazil, who will also work as tournament director for the upcoming IFA 2023 Men´s World Championship in Mannheim (Germany). The 56 years old physical educator, who was recently also elected as President of the Pan-American Fistball Association (PAFA), brings more than 21 years of experience of sports management and presented some potential changes of the Fistball rules like the reduction of the potential 10 minutes break after set #4 which might be valid on 1 April 2023 if accepted by the board in its next meeting. Furthermore, the board decided the eligibility for national teams and heard reports about the recent Fistball events as The World Games 2022, the IFA 2022 Fistball World Tour Final, the Pan-American Championships 2022 and the 2022 Pacific Fistball Championships.