Board of Directors meeting: Morocco as 67th member federation 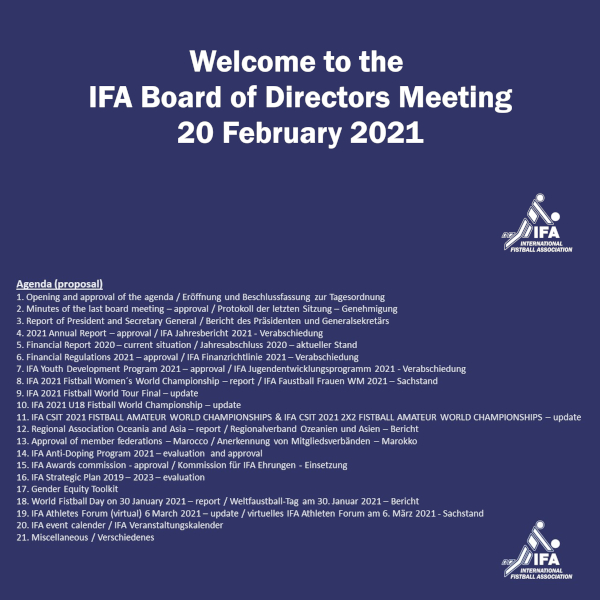 The today´s IFA Board of Directors meeting heard reports on upcoming Fistball events, the inaugural World Fistball Day and approved several guidelines and regulations concerning Anti-Doping and financial matters. Furthermore, the board approved the 2020 Annual report of the President as well as the Financial Report 2020 and welcomed Morocco as 67th member federation.

“IFA is proud to welcome the new member association, which already plans to participate in the upcoming Fistball event at the CSIT World Sport Games in Italy,” said IFA President Jörn Verleger. “I am pretty sure that with the proactive work of our Development Director Roger Willen and the 2018 established IFA Ambassador´s Program we will reached our development goal to have a total of more than 70 member federations latest until mid of 2021,” he said.

Furthermore, the board established a commission to decide about the winners of the IFA awards according to the IFA Honorary Order that is composed by:
• Karl Weiss, IFA Honoray President
• Gastao Engler, IFA Olympic Education Director and
• Wioleta Franczyk, chairwomen of the IFA Women in Sport Commission.

Finally the board announced an IFA Athletes Forum (virtual) on Saturday 6th of March on the eve of the International Women´s Day as the topic is Women in Fistball. The latest IFA Athletes´ Forum had to be cancelled due to technical problems.