#WorldFistballDay on 30th of January 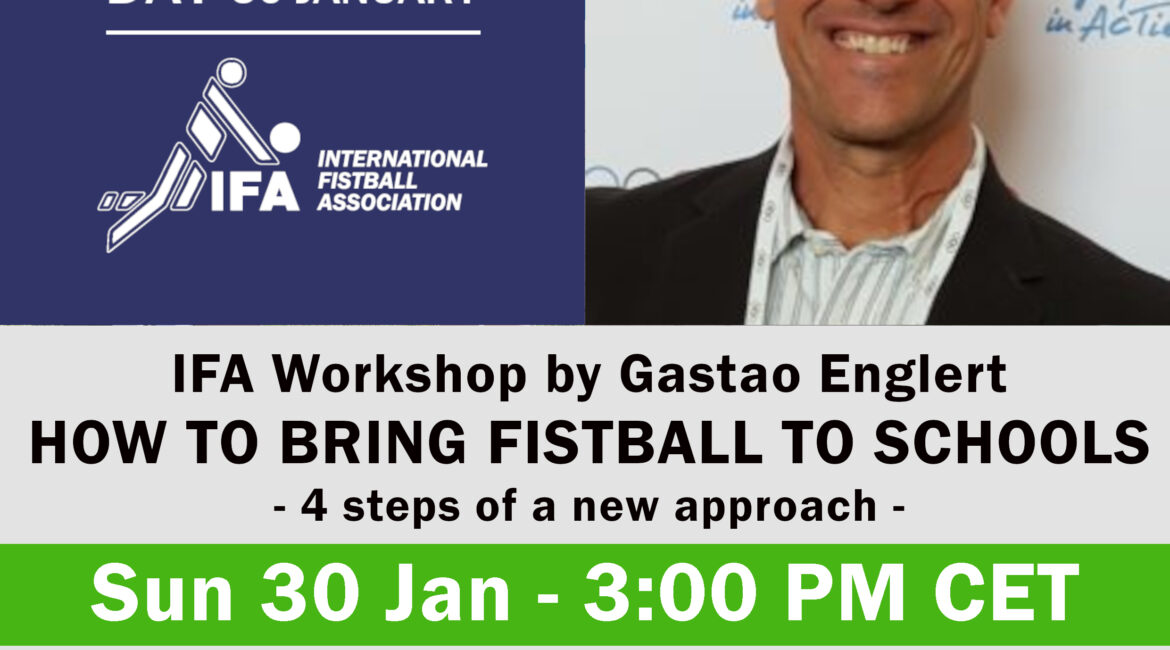 Since last year IFA celebrates its birthday on 30 January as World Fistball Day #WFD2022 with activities and initiatives to promote the sport of Fistball. Highlights are the United by Fistball Challenge, several workshops including 45 minutes workshop “How to bring Fistball to schools – 4 steps of a new approach” by IFA Olympic Education Director Gastao Englert and the IFA 2021 Award Ceremony at 8.00 p.m. European Time on IFA social media channels. The IFA 2021 Awards are presented in 15 categories like player of the year, Fistball picture of the year, rookie of the year or the IFA Media Awards.

At 9:30 a.m. CET we start with the official Opening of the virtual United by Fistball Challenge and “Ask the President” on Facebook LIVE. The challenge is to post pictures/videos showing you/tricks/equipment/everything around Fistball with the hashtag #unitedbyfistball and/or #WorldFistballDay. At 11:30 a.m. CET we invite the Fistball Family to an Entourage Workshop on Safe Sport / Anti-Doping via MS Teams. To register send an email to office@ifa-fistball.com to receive the link to the MS Teams session.

At 3 p.m. CET Fistball Academy member and IFA Olympic Education Director Gastao Englert from Brazil runs the 45 minutes workshop “How to bring Fistball to schools – 4 steps of a new approach”. The Brazilian is one of the most successful coaches in Fistball history and an education expert. He won the World Championship three times as Brazilian coach – 2x Men’s title (1999 and 2003), 1x Women’s title (2010). To register send an email to office@ifa-fistball.com to receive the link to the MS Teams session.

At 6 p.m. CET IFA President Joern Verleger and SG Chris Oberlehner answer the questions raised during the day in the „Ask the President“ session.

At 8 p.m. CET we celebrate the IFA 2021 Award Ceremony on different social media channels e.g. on Facebook and the IFA Youtube Channel. In addition, IFA leadership uses this day to have three Presidents´ Call (one in German, two in English in different time zones) with the member federation president from Oceania, Asia, Europe and the Americas to exchange on current topics about the sport of Fistball. The initiative has started in 2021 to improve communication and exchange of ideas between IFA and its member federations.