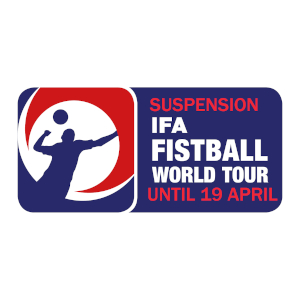 Following a proposal of its Sports Commission IFA has announced a five-week suspension of all IFA Fistball World Tour events due to escalating health and safety issues arising from the global outbreak of COVID-19. The suspension means all IFA Tour events scheduled up to and inclusive of the week of April 19 will not be part of the IFA World Tour ranking. If the event takes place is the sole decision of the local authorities and organizers but IFA recommends to cancel the events.

The five-week suspension comes in the wake of the World Health Organization’s declaration on Wednesday that COVID-19 constitutes a global pandemic. The suspension follows numerous local government orders on restrictions, bans or cancellations of public gatherings or events.

Following the recent cancellation of the IFA World Tour event in Stuttgart IFA has been closely monitoring the rapidly evolving situation related to COVID-19 and will continuously review the feasibility of subsequent events in the calendar.
IFA President Jörn Verleger said: “This is not a decision that was taken lightly. We believe this is the responsible action needed at this time in order to protect the health and safety of our Fistball family and general public health in the face of this global pandemic. We continue to monitor the situation and we look forward when the situation improves. In the meantime, our thoughts and well-wishes are with all those that have been affected by the virus.”

The suspension of IFA events takes place with immediate effect, meaning next weekend´s IFA World Tour events in Curitiba (BRA) and the following events in Novo Hamburgo (BRA), Porto Alegre (BRA), Karlsdorf (GER), Geelong (AUS), Rosario (ARG), Elgg (SUI) and Stuttgart (GER) will not anymore be part of the IFA Fistball World Tour. This will have no impact for the organizers concerning the eligibility of the tournament for next year´s World Tour event list.

If the event takes place is not under the power of IFA, but IFA expects that all organizers review the situation very carefully, but no team participating or not participating in one of these events should have an advantage or disadvantage from the current crisis.
The IFA is carefully reviewing the broad impact of this evolving situation related to IFA Fistball World Tour Ranking as rankings points will not be available at any IFA World Tour events during the suspension period. Concerning the qualification for the IFA Fistball World Tour Finals the IFA Board of Directors will analyse the situation when the fight against the current health corona disease is successfully finished. IFA will try to guarantee a fair qualification process for the finals.

Concerning the IFA 2020 Fistball World Tour Final in Birmingham/Alabama dated 17 – 19 July IFA will continue to monitor the situation in detail. The preparations for the IFA events will continue as planned for the time being and until further notice. It is still too early to make a final assessment of the situation.