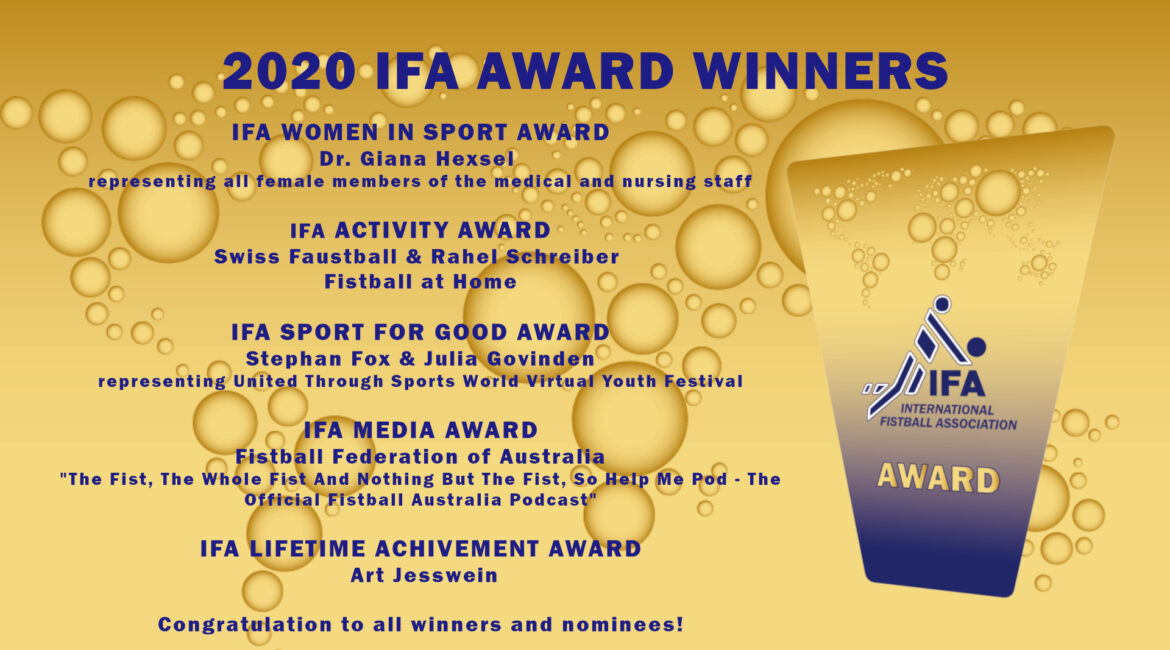 The IFA 2020 WOMEN IN SPORT AWARD goes to Dr. Giana Hexsel representing all female members of the medical and nursing staff.

“Sometimes you just have to say thank you. Thank you to all those who still have the biggest part to play in the current COVID-19 crisis in care and hospital missions, WOMEN, who are there to help day and night”, said IFA President Jörn Verleger.
Dr. Giana Hexsel, who is doing an outstanding job not only within the Fistball family, among others, as Chairwomen of the Medical Commission, but also in their professional life working as doctor in a hospital.

“For her and many other female sportswomen, who are involved in the medical and health sector worldwide, this is a sign of honour to all off the staff member who work for our health currently so hard.” The IFA 2020 ACTIVITY AWARD goes to Rahel Schreiber and Swiss Faustball for the initiative “Fistball at Home”.

Rahel as chairwomen education commission at that time started for Swiss Faustball started with “Fistball at home” a great initiative for Fistball training at home during the first lock-down in spring 2020.

Within five weeks, 27 fistball players – including current or former national team players – from Switzerland, Germany, Austria and Brazil have produced instructional videos with training exercises for home use. These have been published under the hashtag #fistballathome on the social media platforms Facebook, Instagram and Youtube.

The further nominees have been:
– Faustball Austria for the Adventkalender
– TV Rendel e.V. from Germany for Faustball Adventskalender Around 80 sport organisations have joined forces with United Through Sports (UTS) to engage youth in sport during the pandemic.

To get youngsters around the world active during the COVID-19 pandemic, the sport organisations have partnered to launch the first ever virtual youth festival for youth of all abilities.
The IOC, the IPC and several others have granted patronage towards this unique festival event in which many young Fistball sportswomen and -men also participated. The IFA 2020 MEDIA AWARD goes to the Fistball Federation of Australia for „The Fist, The Whole Fist And Nothing But The Fist, So Help Me Pod – The Official Fistball Australia Podcast“.

Since August 2020 Fistball Australia has produced 10 editions of The Fist, The Whole Fist And Nothing But The Fist, So Help Me Pod with a total of more than 15 hours of content.

The further nominees have been:
– DFBL & XinCAST for the TV series Faustball GOLD
– Faustball Austria & evenMo for the TV production of the Final3 in Austria Art first came upon Fistball while he was an American soldier in Bamberg, Germany, from 1956-57, when he attended the Bavarian Junior Fistball Championships and fell in love with the game. Not long after returning to Milwaukee and rejoining the city’s Deutsche Athletic Club, where some of the older members mentioned that the sport had been played there in the 1920s and 30s

In 1963, Art and his friends started practicing regularly on Sunday mornings, a tradition that’s carried on today.

By 1965, Art formed an Milwaukee league and the Wisconsin Fistball Association was founded.

In 1999, the newly formed U.S. national team, with Art as Head of delegation, competed for the first time in World Championships held in Switzerland.

Even today, Art can still be seen on the sidelines in the summer and is happy to support the young fistballers with his experience.

All theses facts reflected Art’s enthusiasm, commitment and dedication of his life to Fistball.