Fistball worldwide – The story from down under

IFA > News > News > Fistball worldwide – The story from down under 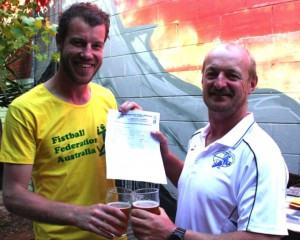 We asked Rolf Petersen (on the right, together with Klemens Kronsteiner IFA), founder of the Australian Fistball Association to explain how everything began. And here is his story!

“As you know, our organisation is fairly new! We formed our federation in early 2013 and the first game of fistball in Australia (as far as we know!) was played at Tullamarine in Melbourne with myself, FiFA Vice President Malcolm Donnellon and a bunch of our friends. None of us had ever played fistball before. I had seen it played in Oldenburg, Germany, but had no idea what it was at the time! We ‘discovered’ fistball after deciding we wanted to play a sport at the national level and looked for something that Australia had no national team. After first playing fistball, we loved it! We have since started a Melbourne league and have 6 teams based here. We have introduced a few Australianisms to the game.. Such as ‘Fistivus’ which is our regular tournament for all teams. This is held about every 6 weeks and teams compete for the Peter Norman Trophy. (Peter Norman was an Australian Olympian in the 1960’s, famous for supporting the two African American athletes on the podium at the Mexico City Games). We have had many highlights in our short existence! First of all, we were amazed by the support we received from fistballers around the world. The Swiss donating us gear after seeing us play with a Volleyball was a great introduction to how social and supportive fistball players are! The IFA have also been very supportive of us from the start and have helped us with advice and equipment. Klemens Kronsteiner flying out to Australia and holding the first ever fistball coaching clinic in Australia. This really helped us in understanding the rules and developing better technique and tactics. This was to prove invaluable when we were invited to the first Asian Fistball championships in Pakistan. Although we came last, we learned a great deal and had a fantastic time. We are very happy to see India and Pakistan also heading to Argentina next year. We are looking forward very much to the world championships and hope to gain even more experience against the more established European nations. We are also looking forward to meeting other fistballers from around the world and being part of the growing fistball family!”