Podcast #33: Update from Grieskirchen, TWG qualification and the board meeting

IFA > News > News > Podcast #33: Update from Grieskirchen, TWG qualification and the board meeting 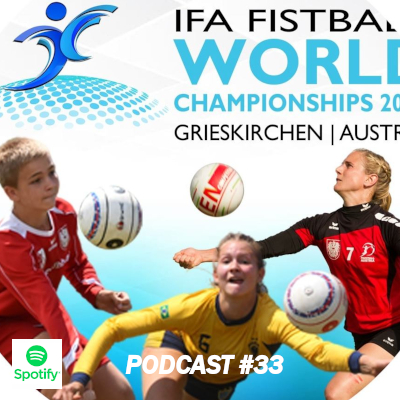 In episode #33 which was recorded on 15 of June Jörn and Chris talk about the IFA board meeting from last Saturday including an update of the IFA World Games Selection and Qualification Criteria, the preparation of the events in Grieskirchen including the IFA 2021 Youth Congress invitation and the IFA nomination for a election of the Alliance of Independent recognised Members of Sport (AIMS) Secretary General.

Many thanks for more than 2000 downloads of our podcast “Fistball Inside” so fare. “Fistball Inside” is the podcast magazine of the International Fistball Association. IFA President Joern Verleger and Secretary Chris Oberlehner analyze every week the latest news from the world of Fistball. The first edition of the podcast was recorded end of July 2020. All editions are also available on Spotify.

We are looking for your feedback to podcast@ifa-fistball.com.

Some editions are also available on the IFA Youtube Channel.

Episode #32:
The breaking news of this episode #32, which was recorded on 31 of May is: a new host for the Women´s World Championship was announced but Joern and Chris also talk about the virtual meetings IF Forum and the IWGA GA als well as the Bundesliga in Austria and the re-start in Switzerland.

Episode #31:
A new regional association in Asia, a big press conference in Mannheim and news concerning the IFA Women´s World Champs 2021, these are the topics Joern and Chris talk about in this episode #31, which was recorded on May 17th, 2021.
IFA is pleased to announce the foundation of the Asia Fistball Association (AFA). Currently IFA has 13 member federations in Asia. Some of them are very active like Japan, that participated in the latest World Championships in Switzerland or the 2019 founded member federation in Hongkong, China or the Fistball Federation Of India, which participated in the U18 World Championships 2017 in Germany. Elected as President was Cheng Tsz-man (Ewing) from Hongkong, China.

Episode #30:
The IFA Board of Directors has approved in its latest meeting an updated version of its Strategic Plan for the period 2019-2023. Joern and Chris talk about IFA´s roadmap for the upcoming two years, that reflects the COVID-19 crises as well as the recently approved IOC Agenda 2020+5. Furthermore, they attended and talk about several other meetings about safeguarding athletes, human rights in sports, the national convetion of the German member association and with sports service providers. The episode was recorded on 28 of April 2021.

Episode #29:
The 2nd IFA Athletes Forum on the main topic “Women in Fistball” is in the middle of episode #29 recorded right after the forum together with the IFA Athletes´ Commission chairwomen Katharina Lackinger listening to and talking about several statements from athletes during the forum. Furthermore, IFA presented in this forum its first ever Gender Equity Toolkit, that provides information about gender equity, as well as ideas / strategies especially for Fistball event organizers for consideration in order to stage events that are more gender equitable.

Episode #28:
Information about the IFA Policy Forum, news from the IFA 2021 World Championships in Austria and Switzerland as well as from the CSIT World Sport Games and the upcoming IFA Athletes Forum are the topics of this episode. The episode was recorded on April 6, the International Day of Sport for Development and Peace.

Episode #27:
IFA Fistball World Tour coordinator Mathias Karafiat explains why the World Tour Season 2021 was cancelled. Furthermore, Joern and Chris talk about the upcoming IFA Policy Forum on 30 March, the cancellation of the EURO 2021 in Italy and the need of a calender co-ordination meeting for Fistball events. The episode was recorded on the 26 of March.

Episode #26:
Our special guest for this episode is Kristof Lerch, the new elected President of the Fistball Association of Namibia. On the eve of the first match day of the 2021 Bank Windhoek Fistball League season in Cohen the Fistball Association of Namibia elected 28-year-old from Windhoek as its new President. The episode was recorded on the 19 of March.

Episode #25:
The anniversary episode starts with sad news. It is with greatest sadness that we have learnt that our IFA Honorary President Ernesto Dohnalek passed away at the age of 70. As special guest for the topics Fistball World Tour Final and the Fistball World Tour 2021 we are welcoming the chairman of the IFA Sports Commission Winni Kronsteiner for an update. IFA President Jörn Verleger and SG Chris Oberlehner recorded this episode on the 2 of March.

Episode #24:
Jörn and Chris talk about the IFA Board of Directors meeting on 20 of February and the “Fistball Bubble” in Austria. The Board of Directors received reports on upcoming Fistball events, the inaugural World Fistball Day and approved several guidelines and regulations concerning Anti-Doping and financial matters. Furthermore, the board approved the 2020 Annual report of the President as well as the Financial Report 2020 and welcomed Morocco as 67th member federation.

Episode #23:
Jörn and Chris talk in this episode which was recorded on the 16 of February about the “Fistball Bubble” weekend in Austria and the restart in Namibia. Even if nearly the entire Fistball sport is still on ice in many parts, Fistball fans could have watched their favorite sport live again: In Austria measure the best women’s teams in the “Fistball Bubble”. The Austrian Women’s Indoor Fistball championship kicked off. Furthermore, the 2021 Bank Windhoek Fistball League started at the Swakopmund Fistball Club (SFC) following a three-month break.

Episode #22:
Jörn and Chris evaluate the first World Fistball Dayon 30th of January, which was a great success for the International Fistball Association. Listen to Leif’s challenge to Australia when it comes to the history of Fistball in South Africa and what several member federation presidents say about the current situation in their countries.

Episode #21:
Chris and Jörn talk about the program of the inaugural World Fistball Day on 30 of January including an IFA Entourage Workshop on Safe Sport and Anti-Doping. One thing you definitely should not miss is the facebook Premiere “The Mighty Fist documentary” on that day about the first South African team, which was established in 2014 by Leif Petersen, who was looking for an alternative sport to play as a way to make his mark representing his country. And finally the action “Fistball Clean Out” or in German “Miste deinen Faustball-Kleiderschrank aus!” for the benefit of the IFA Development Program.

Episode #20:
IFA President Jörn and SG Chris talk about the IFA 2020 Awards presented on 9 January and a very powerful statement made by Karin Kempinger within the Athletes´ Forum. Listen to what the Austrian said.

Episode #19:
Lockdown. Training ban. Hygiene concepts everywhere. No spectators in the venues. Canceled championships. Broken dreams. COVID-19 has confronted sport with unprecedented challenges.
But what was the best thing about the sporting year of 2020? Why will 2021 definitely be better?
We talk about the lesson learned that health is more important than anything else. But also that even in times of crisis, there can be further developments and positive as well as sustainable changes. Listen to the last episode of the year 2020.

Episode #18;
The first ever “Fistball inside” episode lasting more than 30 minutes with IFA Development Director Roger Willen reporing about Switzerland, China, Portugal, Jona and a big inside story about the fistball discovery of USA in 1995 in which he was involved in. Listen to an interesting story in our Christmas episode.

Episode #17:
In episode Nr. 17 we focused on the IFA Board of Directors meeting on 12 Deecember and informed about all the decision taken. Listen and learn more about the new IFA Youth Program, the IFA Awards 2020, the approval of our 66th member federation Portugal and the new IFA Safe Sport Policy, which will be presented on the confirmed IFA Athletes Forum (virtual) on 9 January 2021 as well as the 61st birthday of IFA on 30 January 2021, which will be celebrated as new established World Fistball Day every year in the future.

Episode #15:
What do the female Fistball players think about the decision to host the next Women´s World Championships? Listen to Janine Stoob, captain of Swiss Fistball national team. Honest words also to the question, which value a world championship would have, if not all teams are allowed to travel to Jona next year.

Episode #14:
IFA sent out a powerful signal during worldwide pandemic and published TSV Jona (Switzerland) as new host of 2021 Fistball Women’s World Championship. In this episode Nr. 14, which was recorded on 19th of November Jörn and Chris talk with TSV Jona board member Sebastian “Sebi” Kammer about the current preparation and what teams can expect next year in Jona.

Episode #13:
Our special guest of episode #13 is IFA Honorary President Karl Weiss with whom Jörn and Chris attended the AIMS General Assembly on the day the episode was recorded. Other topics are the annual meetings of IWGA and the IF Forum all held virtually during the last week.

Episode #12:
How is an international sports association like IFA financed? Joern and Chris talking in episode # 12 about the importance of public subsidies for IFA and their meeting with Vice-Chancellor and Federal Minister for Arts, Culture, the Civil Service and Sport Werner Kogler in Vienna to discuss 2021 subsidies for the IFA headquarters in Linz. The State of Austria for providing a dedicated subsidy since 2017.

Episode #11:
In episode #11 we are talking about the concept for the upcoming Fistball Bundesliga Indoor Season in Austria including COVID-19-tests, the cancelation of the European Champions Cup Indoor at the beginning of January 2021 and the IFA Board of Diretcors meeting on the 10th October 2020.

Episode #10:
In our anniversary episode #10 we are welcoming a special guest: our dear friend Stephan Fox, President of United Through Sports and AIMS, former World Champions of Muaythai and Secretary General of the International Federation of Muaythai Associations (IFMA).

Episode #09:
We are talking about the rules of the 2×2 Fistball event in Leipzig next year, the United Through Sports virtual Festival and the IFA activities within United Nation´s project “Sports for Climate Action”.

Episode #08:
Joern and Chris analyzing the results of the Austrian Fistball Champs last weekend and discussing some proposal to promote Fistball better. Furthermore, first information about the 2×2 World Champs in Leipzig next year. The episode was recorded on the 18th of September 2020.

Episode #06:
This time it is only a very brief update on this week´s activities, the CSIT World Games and an update concerning the Fistball Women´s World Champs next year.

Episode #05:
We are talking about
– the International German Gymnastics Festival next year in Leipzig,
– the United through Sports Virtual Festival and
– in our category Fistball History about the 25th aniversary Fistball Men´s World Championships in Namibia 1995.

Episode #04:
Only 6 days before the opening ceremony of the Olympic Games 1972 in Munich, the second Men’s Fistball World Championships took place in Germany for the first time. A total of 8.700 spectators watched the 29 matches of the 7 participating nations. We talk in this episode with the 1972 Fistball World Champion Peter Sievers, a former IFA Vice President until 1991 and IFA Honorary Member, who was part of the successful German Team in Schweinfurt.

Episode #03:
U18 national player Leni Schuh from Austria analyses with teammate Philipp Einsiedler, who gave his debute in Team Austria the friendly matches between Swiss and Austria nd we talk the first time about the plans to hopefully host the next year´s Women´s World Championships in Jona (Switzerland).

Episode #02:
With Special Guest Ajith-Deephan Anthony-Fernando from TSV Pfungstadt (Germany), who announced in the week before his retirement from the German Fistball League National Team after 61 international matches and two World Cup, three European Championship and two World Games titles we talk about the re-start in Germany and in Austria.

Episode #01:
The start of a new weekly project with the topics 3rd IFA Youth Congress, IFA Fistball Academy including training modules and latest information about the U18 World Champs 2021.