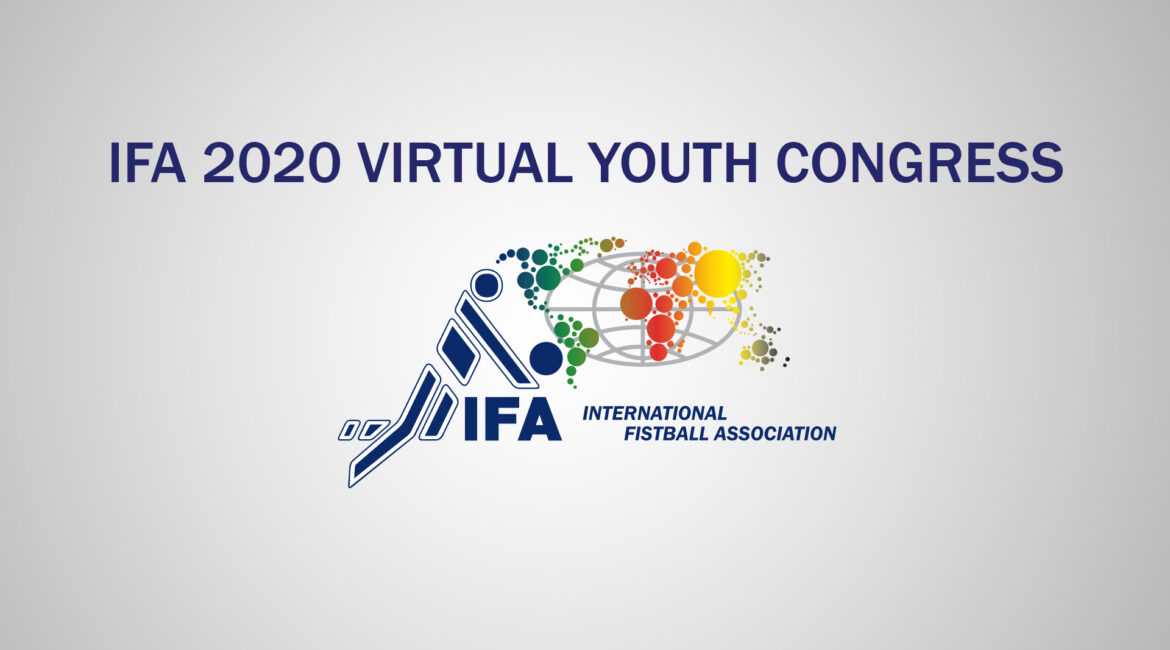 The IFA Youth Congress was held as virtual event the first time in IFA history. More than 50 participants from all over the world made the congress a big success for Fistball. Main part of the Congress was the presentation of the first training module published by the Fistball Academy. The aim is to support smaller federations but also schools and clubs with training material in theory and practice.

IFA President Jörn Verleger opened the stage with an update about the importance and necessity of cooperation with umbrella federations like AIMS and GAISF or multi-sport events like The World Games. He also informed the participants about the current status of IFA’s IOC recognition process. Receiving the recognition by the International Olympic Committee is important for our sport and all its member federations because then they are eligible to get subsidies from their national Olympic Committee.

One of the congress’ highlights is the presentation by Julia Govinden, CEO of United Through Sport (UTS). Julia Govinden reported on the current activities of UTS. UTS will organize an event which offers young people around the world the opportunity to get active, by uniting youth with different skills promoting unity in diversity, sport, and education.

Uwe Schneider, Chairman of the IFA Youth Commission, presented not only the work and new members of his commission but also the current activities of the Fistball Academy.

The Academy Webpage is structured in a new layout according to these three columns.
His presentation mentioned a part of Fistball history because during the Youth Congress the first training module was published by the Fistball Academy.

With the development of training modules IFA wants to support our smaller federations, but also schools and club teams.
Each module contains a document with a detailed description in text and pictures and a presentation with the most important contents. New is the supplement by video sequences and contributions, which ensure an easier and better communication of the described contents. Further training modules are in preparation.

Start of United by Fistball campaign

A second big topic of Uwe Schneider was the presentation of the „United by Fistball“ campaign. The “Fistball at Home” initiative started by Swiss Faustball has shown how pioneering and creative learning videos with tips and hints for Fistball training can be.
With the “United by Fistball” training platform, this initiative is being continued as part of the further development of the Fistball Academy. All videos are from experienced coaches and players. The videos are divided in different categories and levels. All videos are accessible on Fistball.tv and ifa-fistball.com. If you are intersted in supporting the campaing contact Uwe Schneider: u.schneider@ifa-fistball.com

Later IFA Development Director Roger Willen presented IFA’s development program to give sustainable support for new nations and to promote existing nations continuously. The aim is to ensure the ongoing development of the associations in coordination with the continental associations and especially with the Fistball Academy. Associations like Hong Kong, Samoa, Fiji, Cook Island, Uganda, Bolivia, Haiti or North Macedonia have become full IFA members in the recent past and IFA is in contact with different countries who applied for membership.

In order to expand existing associations and develop new ones it is necessary to have dedicated fistballers who are actively involved in the development program – the “Fistball Ambassadors“. The ambassador should be the main contact for the board members in the local association with the aim of leading the new association as soon as possible to a full member of the IFA. If you are interested to join the Fistball ambassador programme contact Roger Willen: r.willen@ifa-fistball.com

IFA has evolved from a sports federation to a service provider and is responsible to support clubs and associations. „We are offering our help particularly in organizing events. Our services are adapted to our sports and include Ticketing, TV-Production, the OTT platform, Media Work and Sports Presentation. The service providers we work together with are experts in their field and paired with our experience you get a great deal for a small price. Furthermore we created special event boxes with all necessary materials to support our hosts“, Oberlehner said.

One big task was the relaunch of Fistball.tv. The new version is very user friendly and includes new features and access to video sequences from the past years. Special Thanks to Valentin Weber for the great work within the last months. IFA’s member federations will be able to get their own video platform in their own design in the next months. All information on that topic will be published soon.

Finally the participants got a short report of the current status of U18 World Championship in Austria. The World Championship had to be postponed to 2021 and the local organizers in Grieskirchen are working to create a big Fistball festival next year. Save the date: 29 July to 1 August 2021.

Get all detailed information to the IFA Youth Congress here: