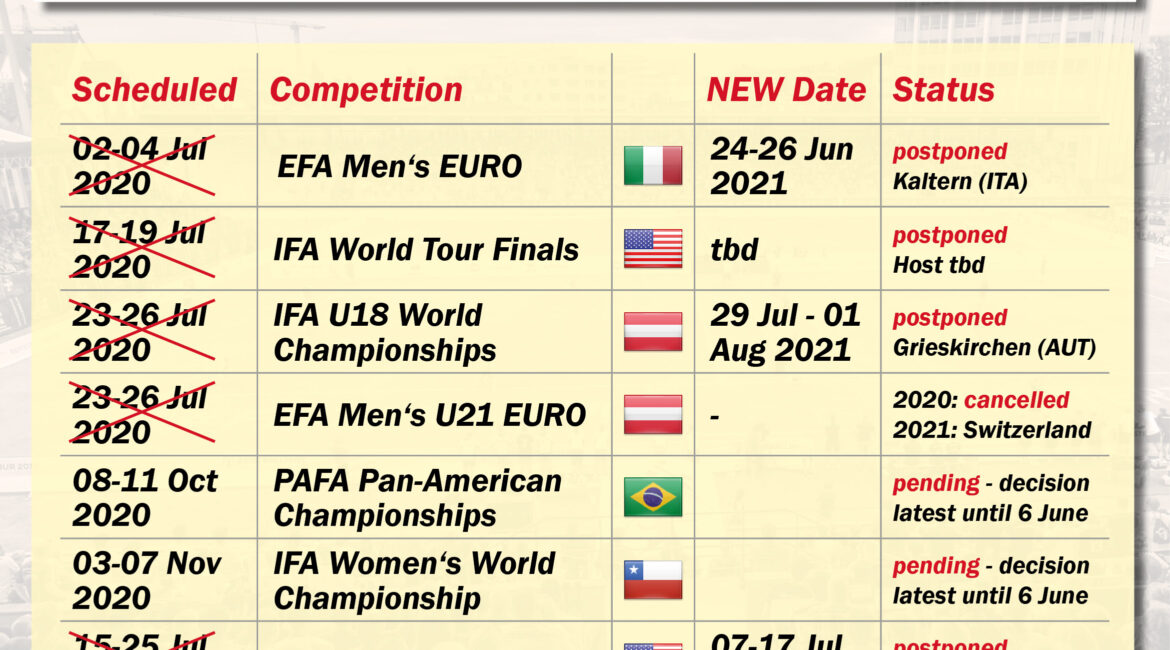 Due to the global impact of the COVID 19 pandemic, the International Fistball Association IFA decided today in its board meeting via video conference on the further procedure for the planned events in summer 2020:

The Fistball U18 Men’s and Women’s World Championship in Grieskirchen (Austria) will be postponed to July 2021.

As the health of all participants – players, coaches, officials, fans, staff and volunteers – has the highest priority and a safe arrival and departure must be possible for all qualified and participating teams no other decision was possible. With this in mind, IFA, together with all the partners involved, have examined a number of options how the mentioned events can be carried out.

IFA president Jörn Verleger praises the cooperation of all parties involved: “The decision to postpone the U18 World Championships and the World Tour Finals as well as the cancellation of the World Tour 2020 was not taken frivolously. It is a decision in the interest of the health of the entire Fistball family. Thanks to the organizing committees, the local authorities, the European Fistball Association EFA and Pan-American Fistball Association PAFA. The kind of cooperation in this special situation makes me proud. Each party has always acted in the spirit of our sport and had to contribute its share to achieve a common result”.

The IFA U18 Men’s and Women’s World Championship will be postponed until July 2021 and will take place in Grieskirchen, Austria, from 29 July to 1 August 2021. The key date for qualified players will not be changed. Players who would be eligible to play in 2020 will also have the opportunity to participate in the World Championship in 2021.
The IFA Youth Congress planned for 23 July 2020 will be held as a virtual congress.

The IFA Men’s and Women’s World Tour Final had to be postponed to 2021, as there was no free capacity at the event site or at the hotels on any of the possible replacement dates.

The teams participating in Birmingham 2020 will automatically qualify for the 2021 edition of the finals. If necessary, the number of participants will be increased to integrate the possibly new South American Champion and European Cup winners of 2020.
The host city and the confirmed date will be announced after further arrangements with the organizers.

Due to many existing national regulations regarding the staging of events, partly until the end of June, the IFA Fistball World Tour season 2020 has to be cancelled.

“A World Tour season with a maximum of ten tournaments would have put some regions of the world at a significant competitive disadvantage. In addition, the further development of the corona virus and a relaxation of the restrictions cannot be seriously assessed at present, which is why we took an early season cancellation as the only responsible action. It’s our obligation to protect the health and safety of our Fistball family and the general public in the face of this global pandemic. We are looking forward to an even stronger World Tour in 2021,” said Winfried Kronsteiner, Chairman of IFA Sports Commission, explaining the cancellation of the 2020 season.

The EFA U21 Men’s European Championship in Grieskirchen is cancelled as the next regular event will be carried out in Switzerland in 2021 already.

The European Fistball Association EFA decided in its board meeting to postpone the ordinary Congress in Kaltern (Italy) to June 2021. The Women’s Champions Cup in Jona (Switzerland) and the Men’s Champions Cup in Linz (Austria) still are planned to carried out from 21-23 August 2020.

Concerning the upcoming Fistball events in October and November – the PAFA 2020 Pan-American Championship in Brazil and the IFA 2020 Fistball Women’s World Championships in Chile – it is still too early to decide.

The realization of the events is currently endangered due to the global COVID 19 pandemic. “We are in close contact with PAFA, the Chilean Fistball Federation and the local organizers in Llanquihue concerning a postponement, cancellation or other solutions regarding the World Championship and we monitor the current situation permanently”, says IFA Secretary General Christoph Oberlehner. The final decision shall be taken by the Board of Directors’ meeting on 6 June 2020 at the latest.

“I would like to thank our continental federations, the national leagues and our IFA team for the great commitment and the lived solidarity in our Fistball family”, says Oberlehner.