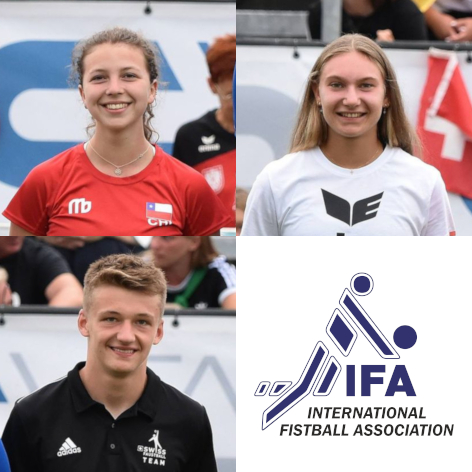 U18 national team players Florencia Schwaner (CHI), Anika Hartl (AUT) and Davin Hossmann (SUI) are the first ever U18 representatives to the IFA Youth Commission elected by the participants of the IFA U18 Fistball World Championships in Grieskirchen (Austria). On the occasion of 30 years of the adoption of the Convention on the Rights of the Child by the UN in November 2019 the IFA Board of Directors has decided to strengthen the rights of children by the election of an U18 representative through the participants of the next U18 World Championships. Currently 25 percent of the 65.000 Fistball players worldwide in 67 countries are under 25 and half of this group are minors under 18.

“We warmly welcome the new commission members and are very much looking forward to working with the young athletes” says Uwe Schneider (GER), chairman of the IFA Youth Commission. “All of them have already proven with their ideas presented before the election, that they are willing to contribute to the development and youth appeal of Fistball” IFA President Jörn Verleger added.