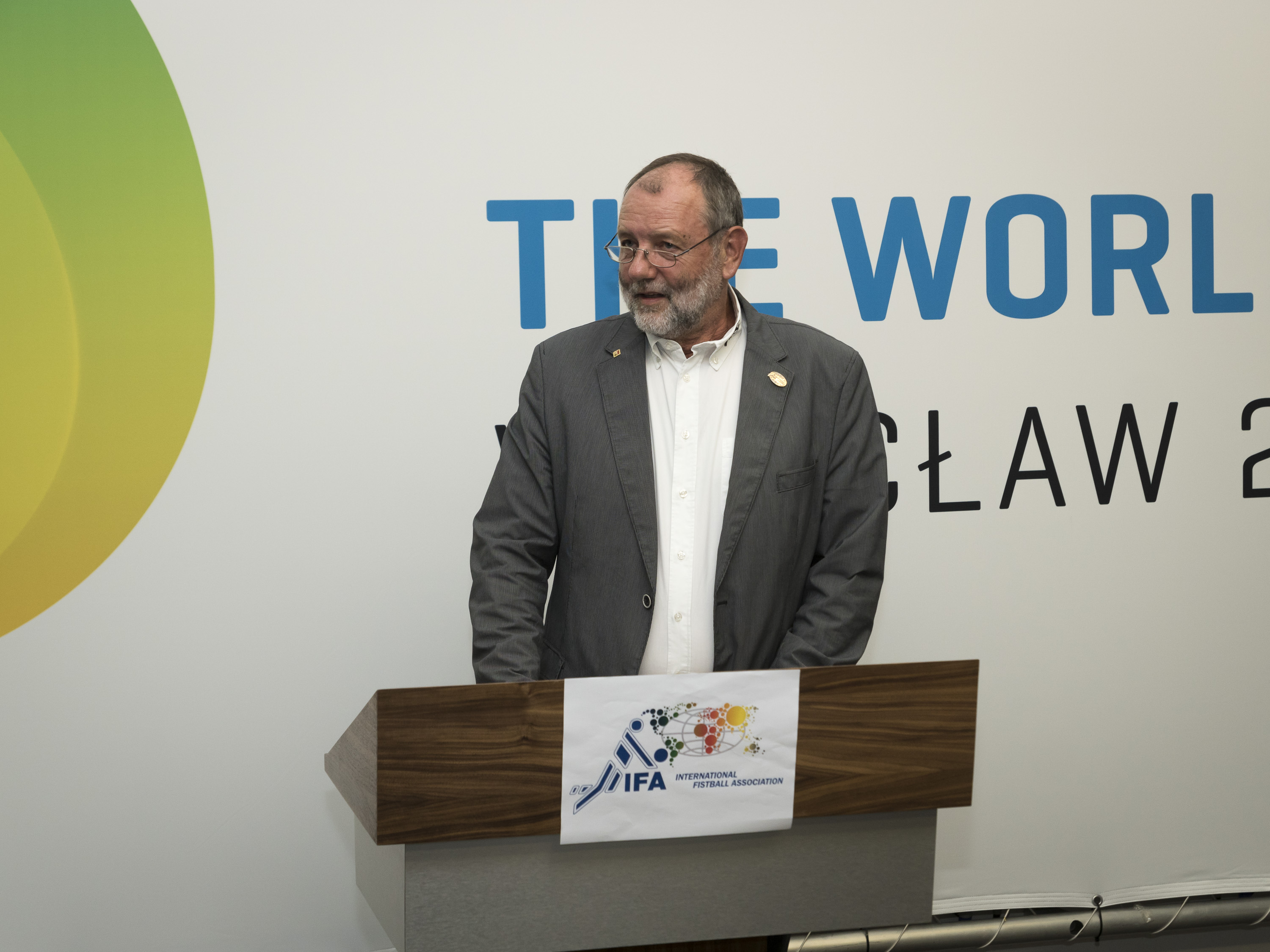 At the first International Fistball Association (IFA) Cocktail Reception powered by Sportradar, hosted in the framework of The World Games in Wroclaw and on the occasion of the presentation of the new IFA OTT platform www.ifa-fistball.tv, IFA President Karl Weiss suggested in the presence of IWGA President José Perurena and his wife to add a female fistball competition to The World Games 2021 Sports Program in Birmingham, Alabama. Fistball is part of The World Games since 1985 in London with a male competition. Six teams participated in Wroclaw where Germany defended the title in a thrilling 4:3 final.

“The best female fistball players deserve to be present in Birmingham. You will love to see them play.” The World Games 2021 Birmingham Sports Director Steve Mistrot may have listened well as IFA has expressed this wish not for the first time during the last years of cooperation with Birmingham, having had several meetings with IFA on the occasion of Sportaccord conferences. The World Games Birmingham Sports Program will be fixed after analysing the 2017 TWG edition.

Many sports leaders including IWGA Executive Board members Anna Arzhanova, Lukas Hinder and IWGA CEO Joachim Gossow as well as AIMS President Stephan Fox and AIMS Secretary General Gerd Zimmermann joined the reception at the hotel Sofitel, together with IFA Honorary President Ernesto Dohnalek and representatives of the participating teams, and other International Federations.
Felix Graf, Director Digital Platforms International of Sportradar presented the core of the entered long-term partnership between IFA and Sportradar. As a first step, the collaboration includes usage of Sportradar OTT – an innovative Over-the-top (OTT) video platform. The platform ifa-fistball.tv went live on the opening day of the World Games Fistball Tournament in Wroclaw, Poland, where fistball fans were able to watch the games in the online stream.

With the new “Over-the-top” video platform the International Fistball Association is exploring new avenues and opening to new technologies. “The new video platform brings value added for all fistball fans, clubs and associations. The aim is to develop IFA-Fistball.tv to a central platform where all fistball events will be shown. This adds transparency for all spectators who will not have to check various websites anymore to find the fistball event they would like to watch”, says IFA Secretary General Jörn Verleger. The platform is available free of charge to spectators, as well as to clubs and associations who will have the opportunity to disseminate their own streams.
Part of the partnership is also the marketing of advertisement and sponsoring on the digital platform. “The partnership with Sportradar is deliberately long-term. We are glad to have a strong partner on our side, and that we jointly want to continuously develop. The innovative OTT approach fits perfectly with our expectations. The platform presents itself in IFA “look and feel”, and is being customized to our requirements”, states Mr. Verleger.

“The collaboration with the International Fistball Association is another example for the usage of our new streaming product Sportradar OTT. We are glad to be able to offer a central platform for the fistball community, in collaboration with IFA”, said Felix Graf.
Sportradar OTT is the new video platform product of Sportradar AG, which offers holders of sports rights the opportunity to stream their contents directly live as well as video-on-demand to their fans via online channels. Besides the International Fistball Association, Sportradar OTT has recently entered collaborations with the European Handball Federation (EHF), German soccer club Eintracht Braunschweig, and Italian TV channel Sportitalia.

Sportradar is a global leader in understanding and leveraging the power of sports data with more than 1,650 employees in over 30 locations around the world. The company’s rapid growth is being enabled due to technological innovations and a deep understanding of clients’ business needs. Its commitment to outstanding service, quality and reliability makes Sportradar a trusted partner of more than 800 enterprises in over 80 countries. Sportradar has a unique position in the interface of the sports, media and sports betting fields.
“Sportradar OTT” is based on an innovative approach, how rights holders and Sportradar can collaborate in terms of audiovisual rights. “Sportradar OTT” offers a customized OTT platform that enables rights holders to manage their own brand and CI. Both parties are joining forces in terms of their respective key competencies – while Sportradar would ensure technical preparation and maintenance of the platform and monetize traffic via a fee or advertisement based model, the rights holders would focus on the generation and administration of contents. All generated revenues are being shared, which minimizes risk and effort for the respective associations and events.