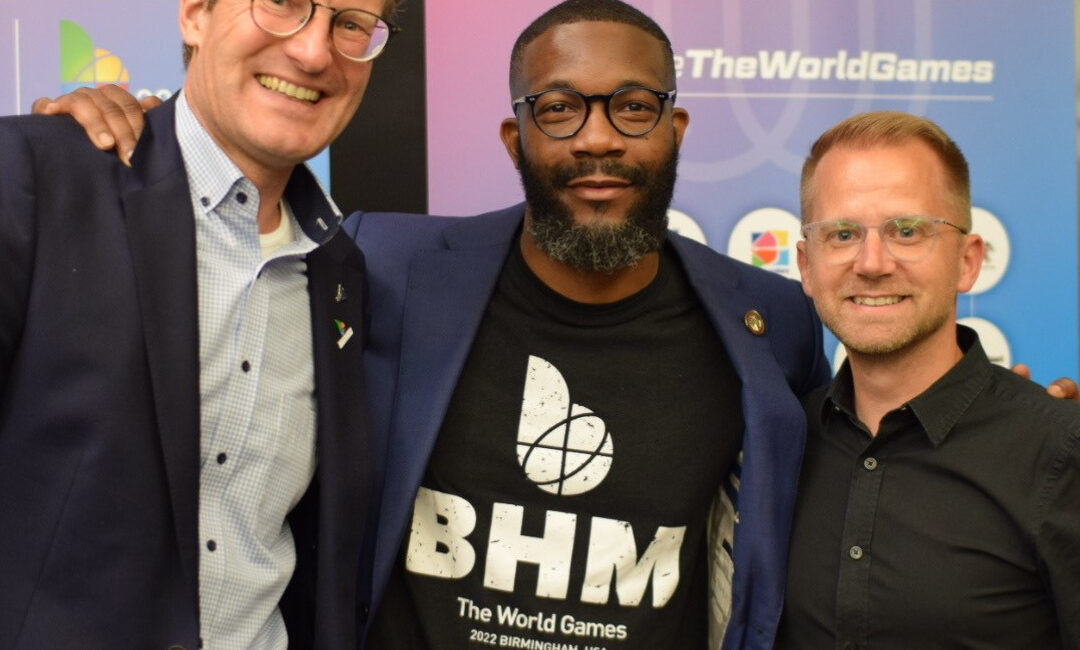 The World Games 2022 will add a chapter to the history of the city of Birmingham, USA. Randall Woodfin, the Mayor of the host city in Alabama, USA, stated this in person at the Annual General Meeting of the International World Games Association, held 49 days before the opening ceremony for the 11th edition of The World Games 2022 on 7th July. The AGM was attended by representatives of the 39 member federations. IFA was represented by President Jörn Verleger and Secretary General Chris Oberlehner.

Mayor Woodfin opened the host city’s presentation by the Birmingham Organising Committee (BOC) at Thursday’s meeting in Madrid. Jonathan Porter, Chairman of the BOC, could already announce to delegates from the 39 IWGA member federations the name of a world star: Lionel Ritchie will perform at the closing ceremony on July 17th 2022 at the new Protective Stadium.

After the detailed presentation of the state of preparation by BOC Chief Operating Officer, Jay Kasten, IWGA President José Perurena summarised: “We expect nothing less than an outstanding event. I am convinced: Birmingham will deliver.”

In 2022, there are 223 Medal events in 34 sports. A record number of 108 nations will be represented at TWG. Men´s Fistball is part of the World Games since 1985 in London. In 2022 for the first time ever a female Fistball competition will take place.

Beyond Birmingham
During the AGM, which was held as a meeting in presence for the first time in two years, delegates were already looking beyond the 2022 Games. IWGA CEO Joachim Gossow unveiled plans for The World Games Series, a new multi-sport format under the patronage of the IWGA. The world-class invitation event – with top athletes and teams – will provide an additional platform for The World Games sports. It will be scheduled twice a year from 2023 onwards. The goal is to strengthen the TWG brand and to raise awareness in the years preceding editions of the Games, which are held every four years.

Already during The World Games 2022 the IWGA is launching its eGaming project. The IWGA will set up an eGaming pavilion at TWG Plaza, at the new location City Walk in Birmingham – as Hagen Bossdorf, TV and Marketing Coordinator of the IWGA, told the delegates. Three sports, Archery, Baseball and Racquetball, will present their virtual games to the visitors. Up to the 12th edition of The World Games in 2025 in Chengdu, Peoples Republic of China, the IWGA in cooperation with its federations wants to expand the circle to ten eGaming sports. Hagen Bossdorf described eGaming as a promotional tool for TWG and their sports. He even sees the possibility in the future of organising e-Gaming competitions at The World Games.

Projecting an Athletes Commission
The IWGA then plans to convene its Athletes Commission for the first time in October 2025. Executive Committee member Jan Fransoo presented the concept for this. Jan Fransoo said, concerning the reasons for establishing such a commission: “The World Games provides the highest podium for our athletes to showcase their athletic performance. Our ambition is that our athletes are at the centre of our considerations and be part of our decision-making processes.” Before 2025, the IWGA is planning to establish an interim Athletes Commission in late 2022. The IWGA board will appoint members of this Commission, based on the nomination of the international federations. “It is crucial that these athletes do not represent their sport, but all the athletes who participate in The World Games,” Jan Fransoo said.

Memorandum of Understanding
Another agenda item dealt with the Memorandum of Understanding just signed between the IWGA and International University Sports Federation (FISU). In addition, the Board is in negotiations about similar agreements with the National Olympic Committees as well as National Sports Organisations and the International Paralympic Committee.

For the International Olympic Committee (IOC), Irina Gladkikh, Andrew Hofer and Céline Moyat Pérez participated in the AGM. The World Games are under the Patronage of the IOC. The IOC President Thomas Bach has announced that he will attend the 11th edition of The World Games in Birmingham, Alabama. Thomas Bach showed his commitment to the TWG family virtually, by opening the AGM with his welcome video message.