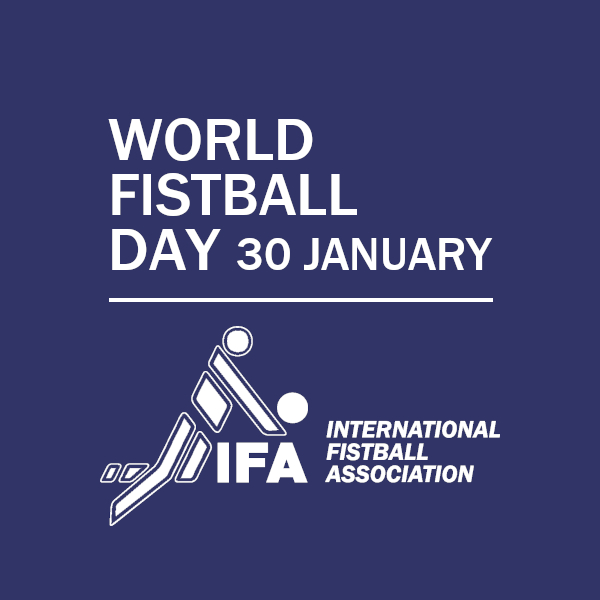 This Saturday the International Fistball Association (IFA) is celebrating the inaugural World Fistball Day 2021 with many activities like the challenge “Fistball Clean Out”, a movie premiere “The Mighty Fist documentary”, an IFA Entourage Workshop on Safe Sport and Anti-Doping and an „Ask the Presidents“ session.

IFA was founded on 30 January 1960. The date of the foundation of IFA will be celebrated as “World Fistball Day” in the future. IFA has asked the Fistball family to clear out Fistball wardrobe.

Send us your old – but still good – Fistball clothes (jerseys, training shirts, shorts), shoes, balls or nets and donate it for other Fistball players all over the world”. IFA takes care of the distribution of the donated equipment as part of the Fistball Development Program.

Take a picture with your old Fistball equipment, post it on Facebook or Instagram with the Hashtag #WorldFistballDay and tag @IFA – International Fistball Association is the challenge to win prizes.

If you like write a personal message and clip it on your clothes, maybe the new owner will contact you and it’s the beginning of new friendships. Motivate your friends and club mates to do the same and send your clothes to Grünwalder Freizeitpark, c/o Jörn Verleger, Südliche Münchner Str. 35C, 82031 Grünwald, Germany

The Entourage Workshop on Safe Sport and Anti-Doping broadcasted on Facebook at 1:30 p.m. CET is designed for all people, who love Fistball but who are not players on the pitch like spectators, coaches, physios, team managers, family members etc.

One thing you definitely should not miss is the Facebook premiere “The Mighty Fist documentary” at 11:30 a.m. CET on that day about the first South African team, participating in the IFA 2015 Fistball Men´s World Championships in Argentina.

The first South African team, and later the Fistball Association of South Africa (Fasa), was started in 2014 by Capetonian Leif Petersen, who was looking for an alternative sport to play as a way to make his mark representing his country.

Petersen brought together an eclectic group of local sport enthusiasts from all walks of life, including artists, business professionals, conservationists and refugees, to form the sport’s first amateur fistball team: the Galjoens, named after South Africa’s national fish.

Playing in public parks with rudimentary equipment fashioned from safety barrier tape and tent poles, the sport proved to be a fun but gruelling way to bring together a variety of South Africans and combine their love of sport with good humour and ham-fisted puns. Soon other teams formed around Cape Town, including the Kaapse Fisters, the North Beach Knuckle-Dusters and Goldfister. The first annual South African championship, the aptly named Fistivus, was held in 2015.

The Galjoens also took part in their first world championship, held in Argentina in November 2015.

Petersen: “It’s always been every kid’s dream to play for their country, and as I gradually came to the realisation that I would never get the nod for the Proteas cricket team, I had to find a smaller pond where I could be a bigger fish.”

And finally there is an “Ask the President” session at 17:00 PM (CET) on Facebook and Insta.

IFA leadership will have on that date also video calls with the member federations presidents from Oceania (at 8:00 AM CET), Europe (at 10:00 AM CET) and the Americas (at 19:00 PM CET). This offers the opportunities to ask also questions on national or international level.